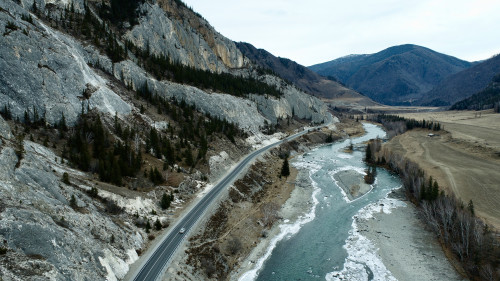 Road works were carried out on the territory of “two Altays”. In the Republic of Altai, the transport and operational characteristics of sections leading to popular tourist sites were improved, and in the Altai Territory, the main task was to expand the route.

Of the two lanes, four sections were transferred to four in Talmensky, Pervomaisky and Kosikhinsky districts of the region with a total length of 25 km: km 143 – km 150, km 173 – km 183, km 212 – km 216, km 230 – km 234. The latter was put into operation with one year ahead of schedule. A two-level traffic interchange was erected near the Ozerki station for safe access of residents of nearby settlements to the federal highway, and an underground pedestrian crossing was built in the area of ​​the village of the same name. Bus stops and pedestrian crossings with traffic lights were arranged in the area of ​​the Novy settlement and Ogonki gardening. Oncoming flows at all four facilities were separated by a metal barrier fence, reversal loops were arranged, and new electric lighting with a total length of 20 km was built.

In the Republic of Altai in the Ongudaisky district, three sections were repaired along the main direction of the Chuisky tract. The structure of the pavement was reinforced using the cold regeneration method to better cope with the increasing loads. The facility behind the Chike-Taman pass (km 668 – km 684) was completed in two years, in 2022 they completed a 6-kilometer section in front of the Kur-Kechu bom. Two more segments with a length of 47 km (km 718 – km 734, km 734 – km 765) run along the Kalbak-Tash petroglyph park, the Chuisky deer stone, the White Bom cliff and the Shirlak waterfall. The coating on all three sections was made of a bitumen-mineral mixture, which provided an increased coefficient of adhesion of vehicle wheels to the road. Sidewalks were built in the settlements of Kupchegen, Yodro and Bely Bom. To improve road safety, a barrier fence was replaced; in total, it was installed along a length of 26 km.

At the entrance to Lake Teletskoye, which became federal property and became part of the Chuysky tract in 2020, a major overhaul was carried out on sections from the Karasuk pass towards the village of Paspaul (km 31 – km 41) and in the area of ​​the Uzlek pass (km 80 – km 88). The structure of the pavement was completely replaced here, which is comparable to the construction of a new road in terms of the amount of work, and 41 culverts were installed. In addition, two bridges were overhauled – across the Sarazon and Turochak rivers.