What was sold in USSR vending machines except soda 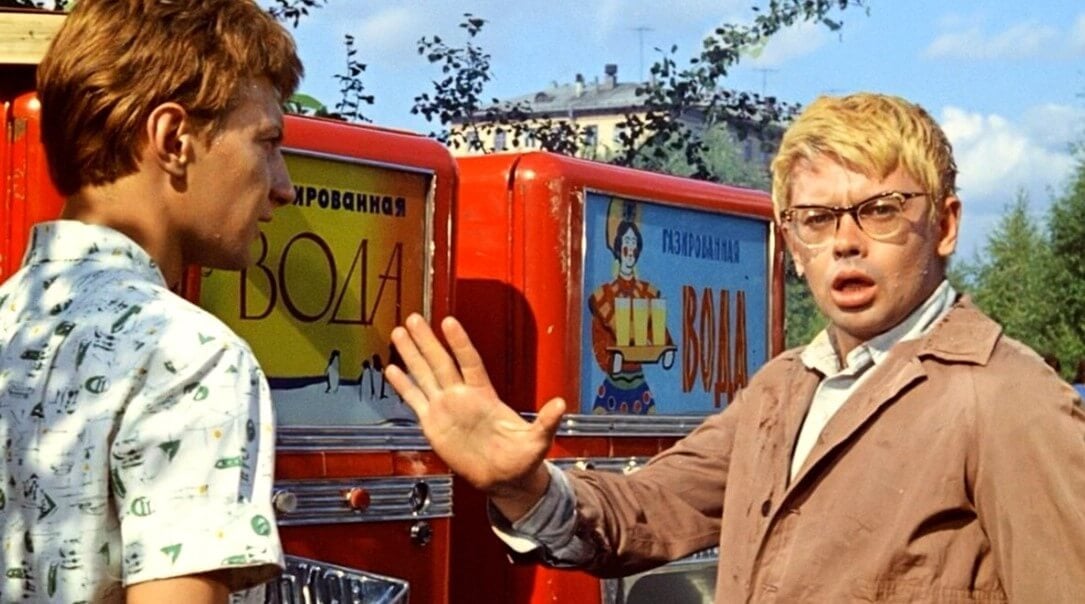 Shot from the film “Operation Y and Shurik’s Other Adventures”

In the 1960s, vending machines suddenly became popular in the USSR, where you could buy sparkling water and many other products and things. The idea to do without live sellers and automate the sale of products came from the United States – the very first vending machines were brought back in the 1930s by the People’s Commissar of the food industry Anastas Mikoyan. However, due to the outbreak of the Great Patriotic War, they did not gain popularity. The Soviet people were able to appreciate the convenience of vending machines only under Nikita Khrushchev – after a visit to America, he ordered to put vending machines wherever possible. In addition to soda machines, on many streets of Moscow and other cities of the USSR one could see machines for selling newspapers, sandwiches and even fragrant perfume. What did they look like and why are they no more?

When did vending machines appear in the USSR?

Nikita Khrushchev visited the United States in September 1959. During his trip, the former head of the government of the USSR was inspired to expand corn crops – the campaign was doomed to failure from the very beginning, because the country’s climatic conditions were not taken into account and corn grew poorly. 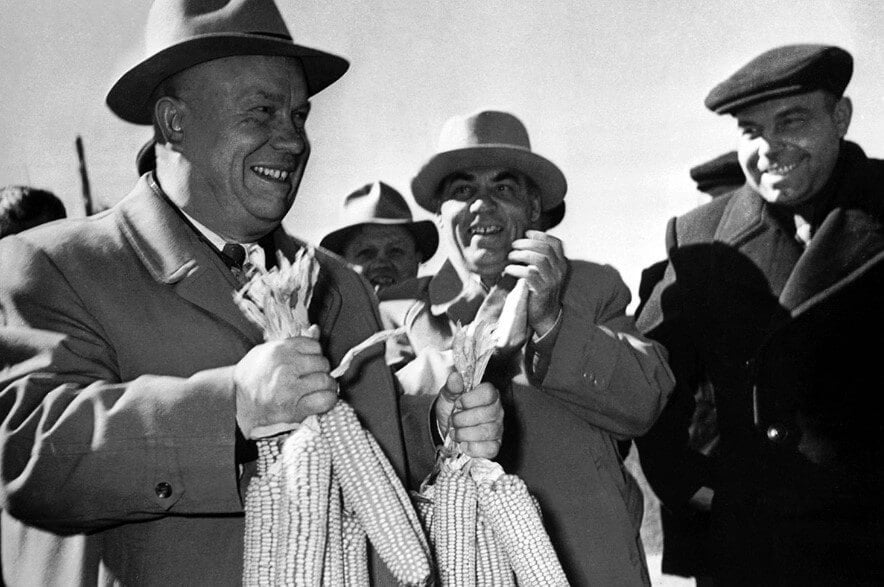 But with vending machines, things went better. During the trip, Khrushchev noticed that vending machines selling food, drinks, and other goods stood at almost every step in American cities. In particular, he saw machines for pouring whiskey and beer, devices for automatically selling potatoes and eggs, and even devices with perfume. 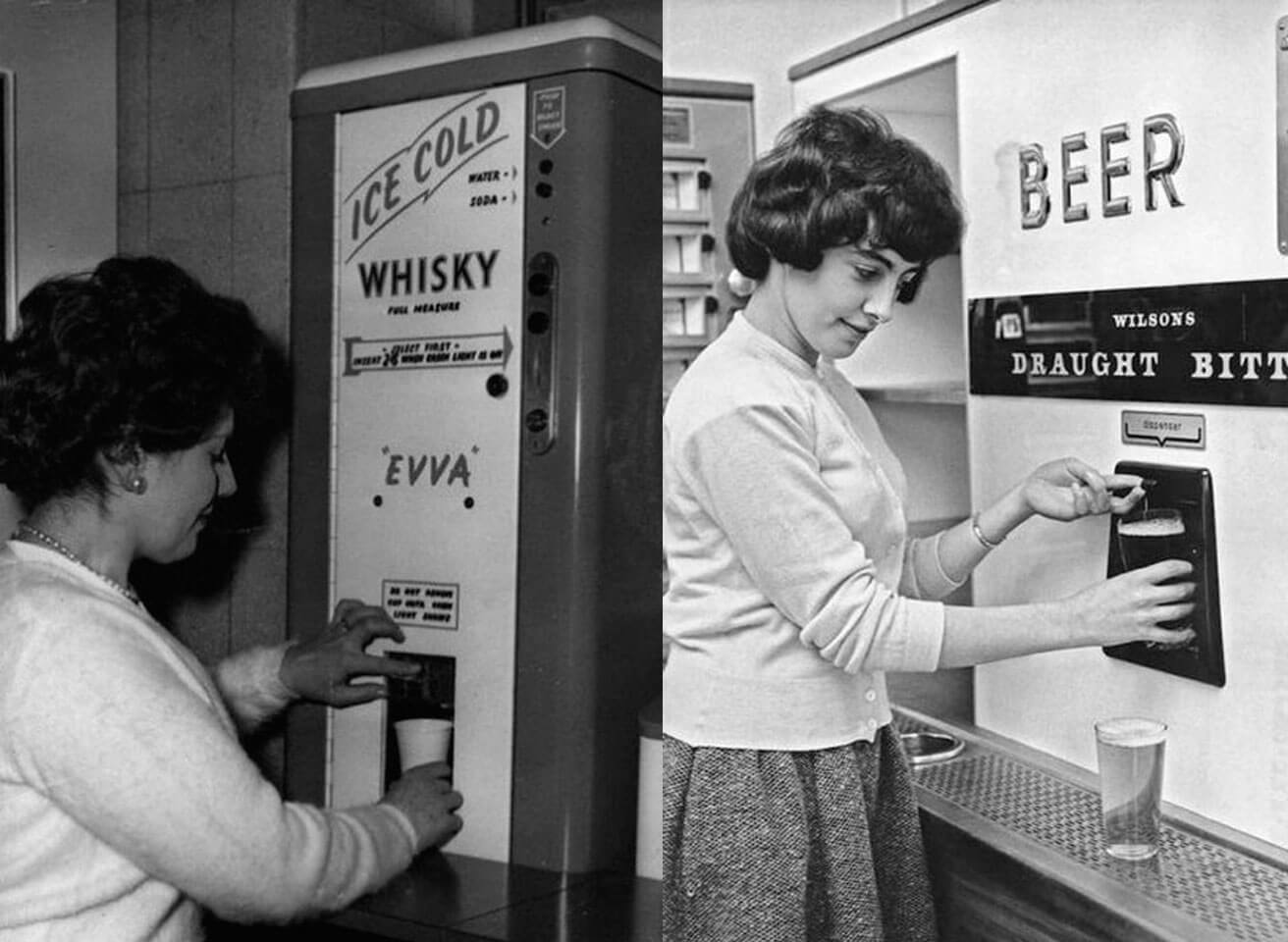 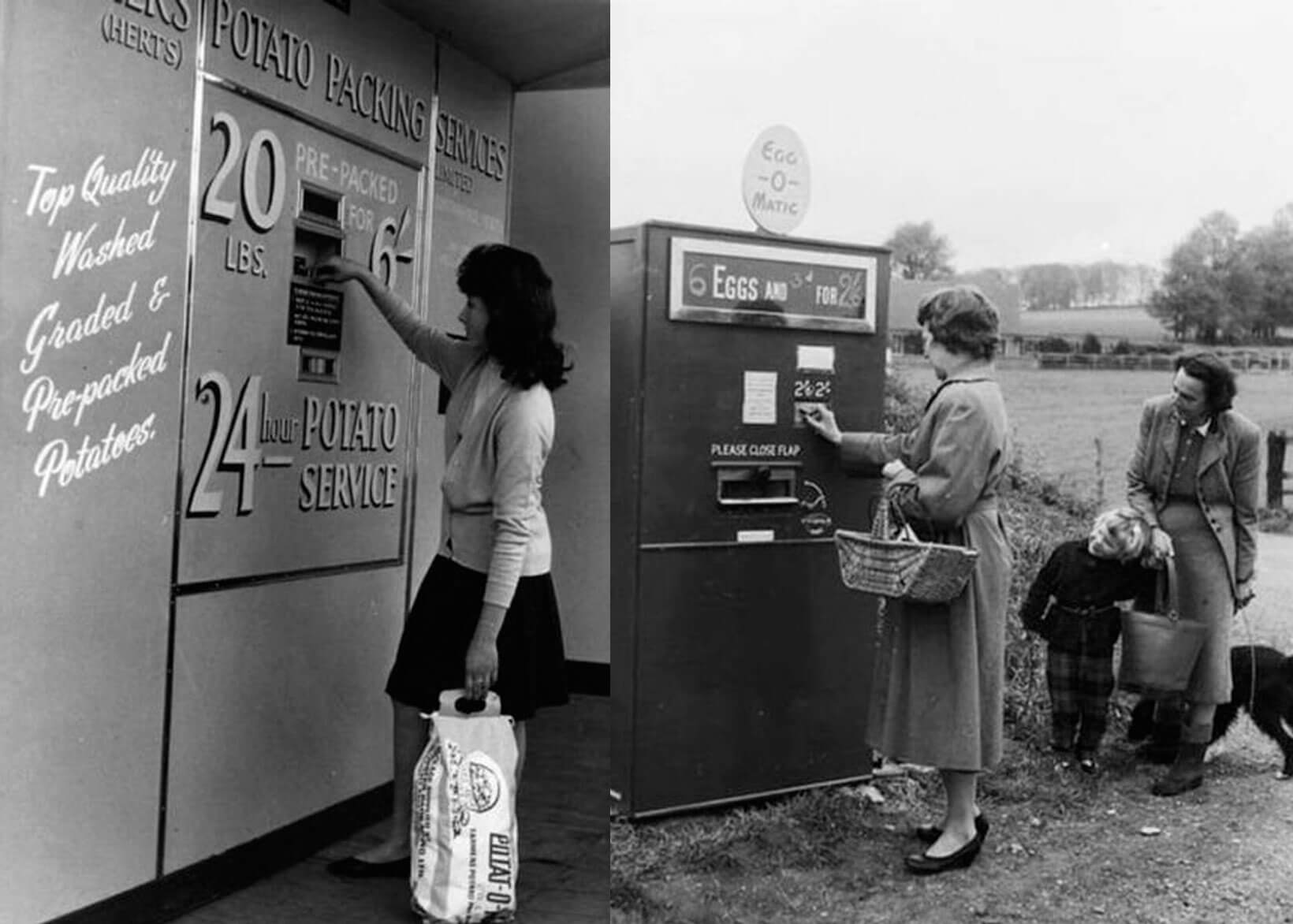 Apparatus for selling potatoes and eggs 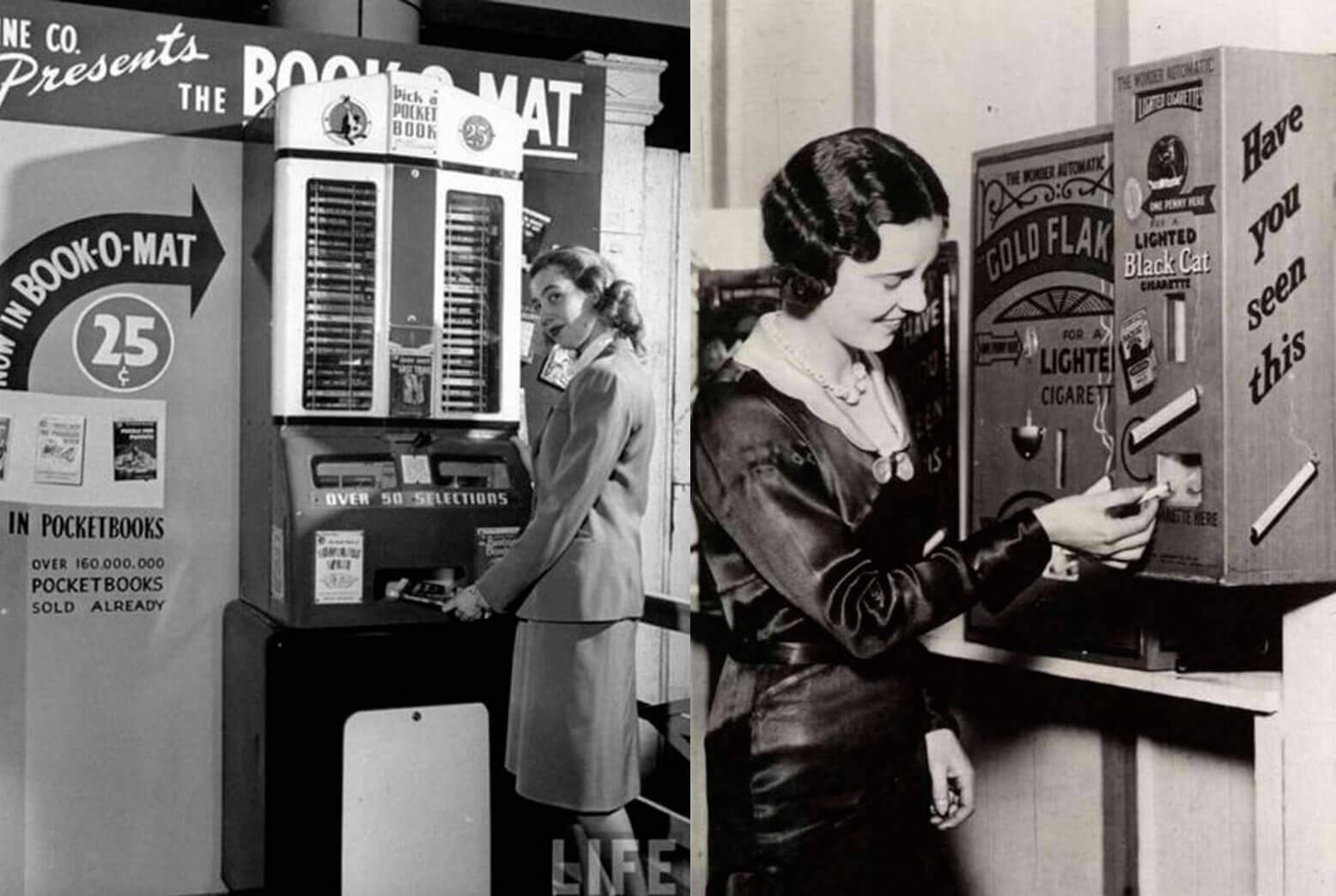 Sale of books and cigarettes 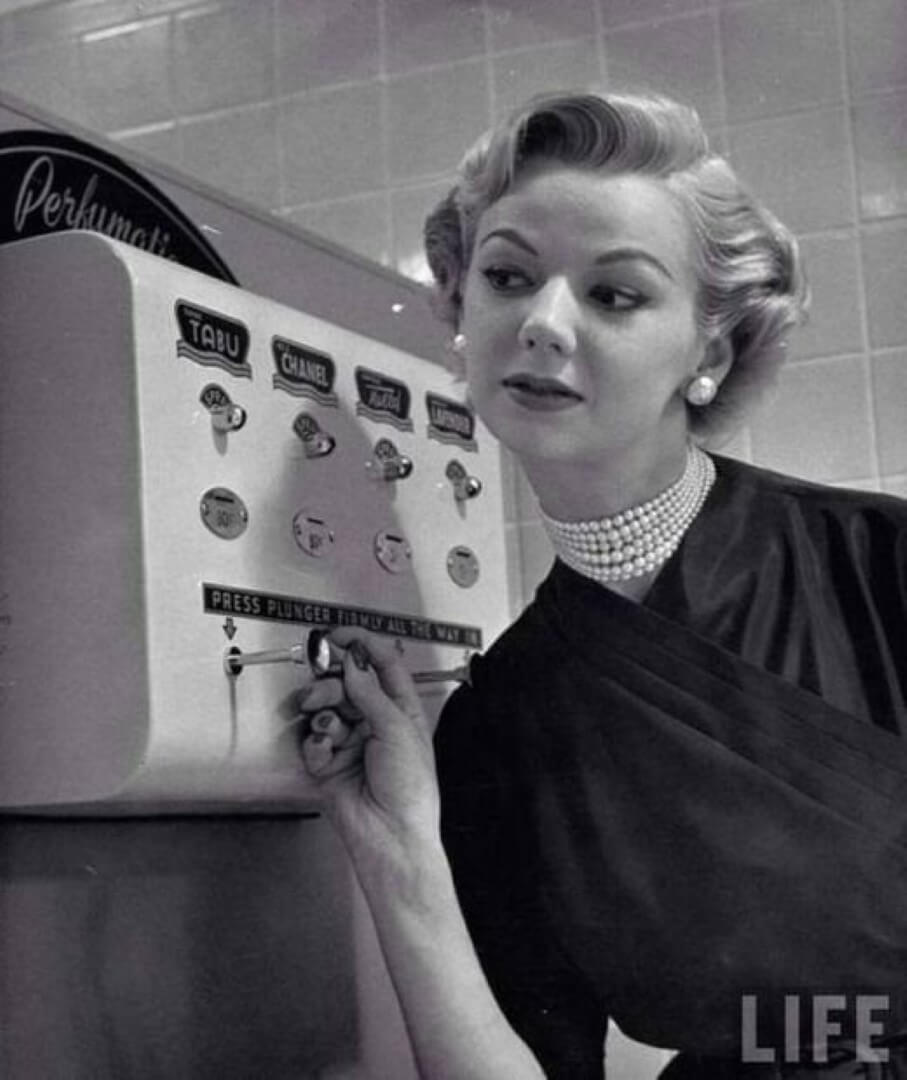 After that, he ordered to begin production of the same devices. They were mainly produced in the Ukrainian SSR. The variety of trading devices was very large, as we will see below.

Soda machines in the USSR

Soda vending machines were the most popular, standing everywhere from parks to community centers. Soviet people could choose a regular soda or a version with syrup: pear, barberry, tarragon, cream soda, bell and so on. Regular soda cost 1 kopeck, and soda with syrup – 3 kopecks. To get a drink, you had to insert a coin, choose a taste and substitute a glass. 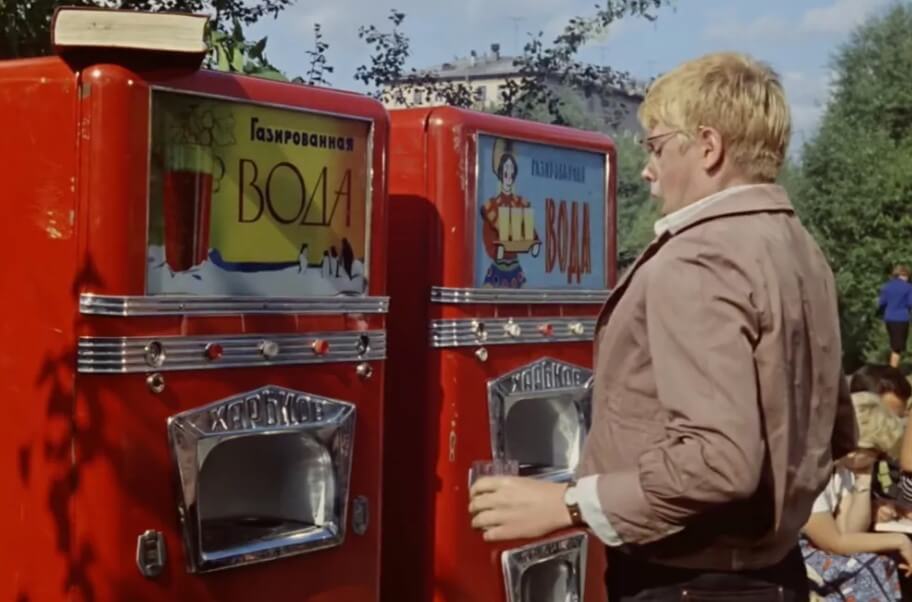 Soda machines can be seen in many Soviet films 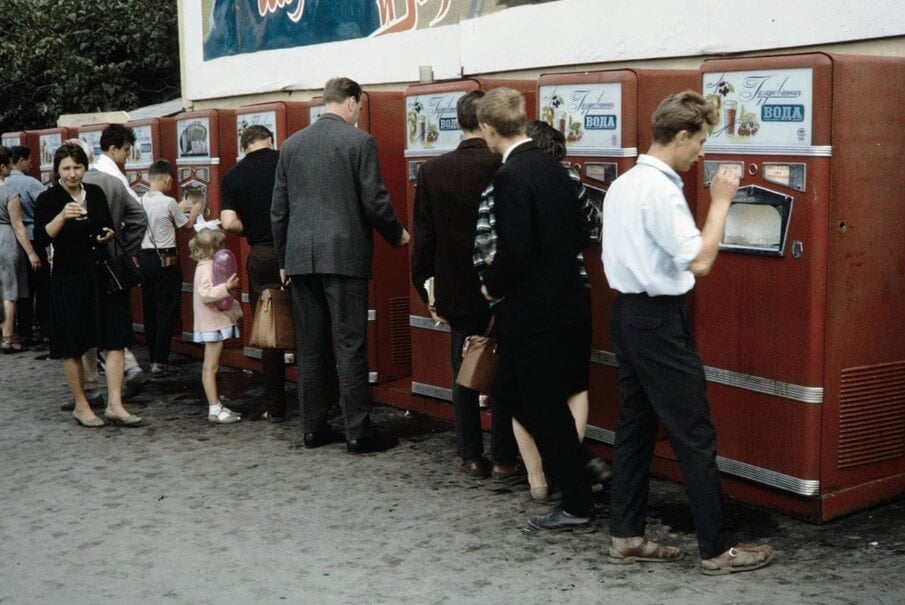 Long queues lined up for soda 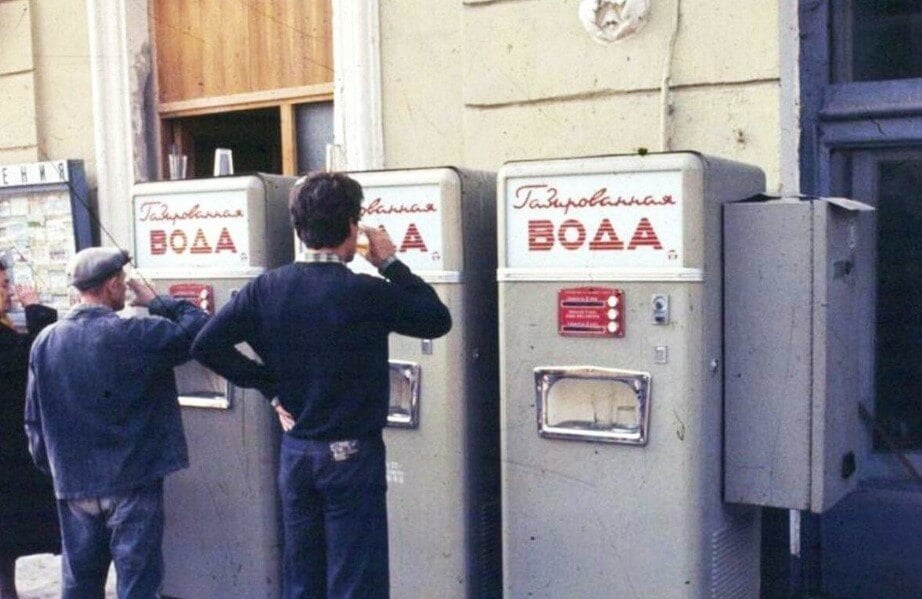 Often there was only one glass for everyone 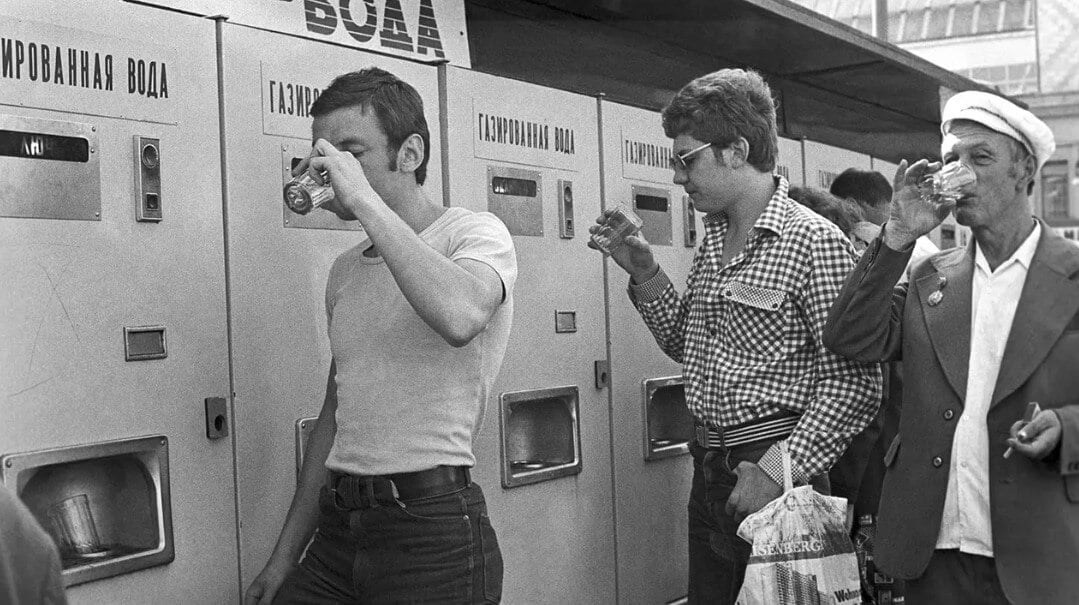 To make the queues go faster, several machines were installed in one place at once

Each machine had only a couple of faceted glasses for everyone in line. To wash it after the previous person, it was necessary to turn the glass upside down and press it into a special nest – it was doused with a small stream of water. Often the glass was cleaned so poorly that it left traces of lipstick. Therefore, some people tried to carry their own glass or avoided vending machines altogether. Whether anyone was infected with diseases through a common glass on the machine is unknown – no one kept statistics. 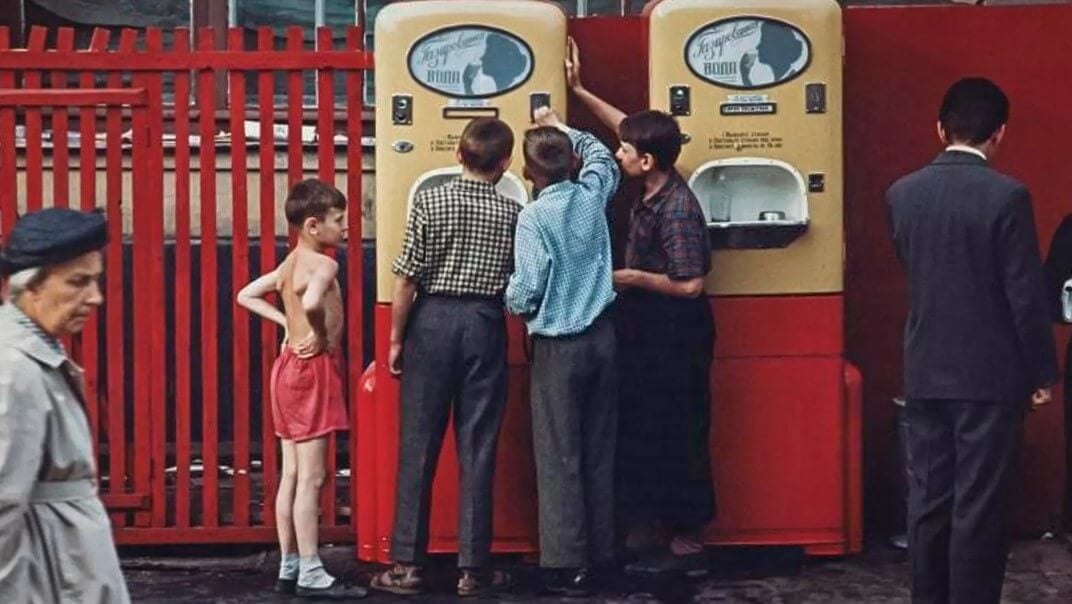 Soda from vending machines was loved by both adults and children 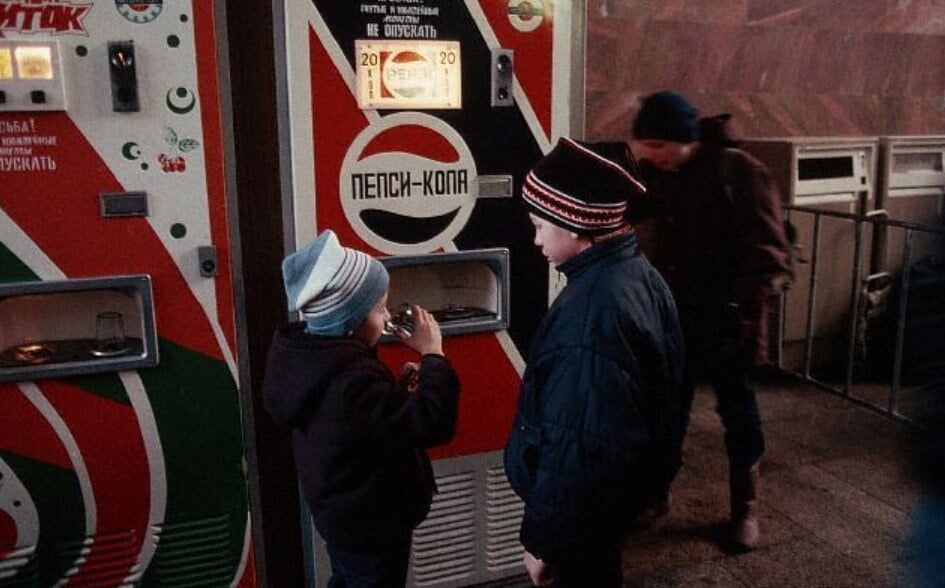 Over time, Pepsi-Cola machines appeared in cities, which cost more than regular soda. 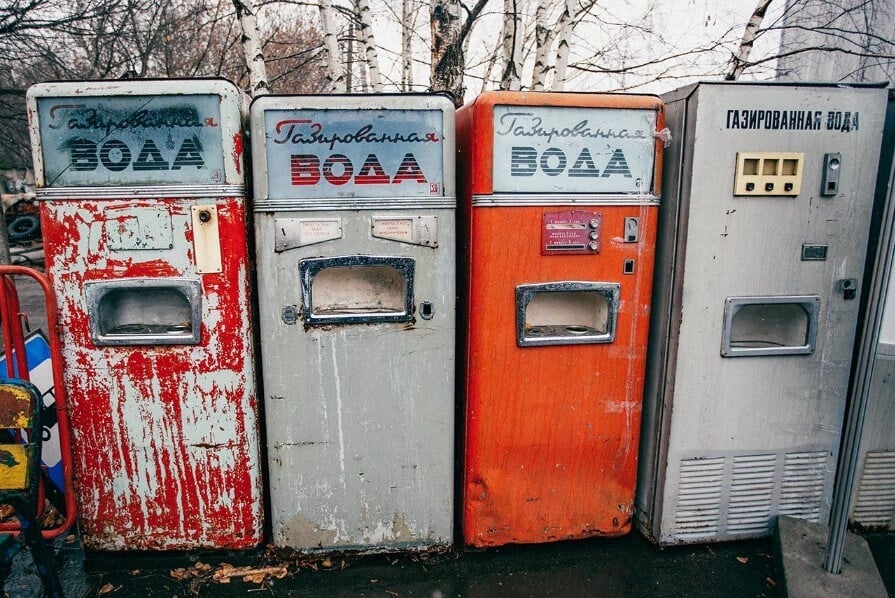 Soviet soda machines are nowhere to be found

Soda machines worked from May to September, and in winter they were covered with a metal box. They stood in Moscow until the 1980s – longer than the rest. In the 90s, the Torgmontazh company serving them stopped installing and servicing them.

Newspaper machines in the USSR

The second most popular were vending machines for selling newspapers – they were usually installed at train stations and subways. When a person dropped 2 kopecks into the receiver, she pressed with her weight on a special lever and released the newspaper. It was possible to remove it from the machine by pressing a special handle. They had a minus – only thin editions were placed inside, so multi-page editions were not sold in them. 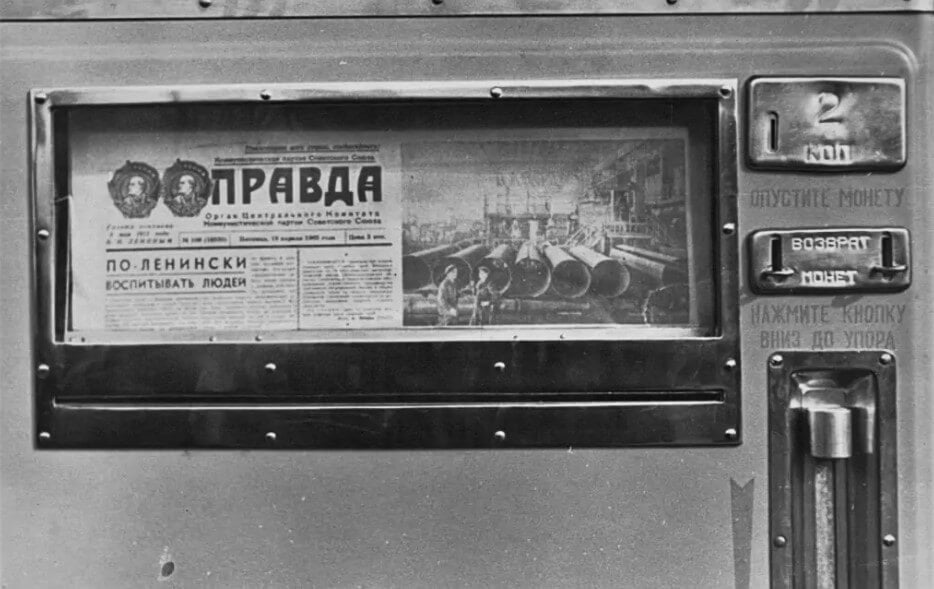 Newspaper machines had the simplest design 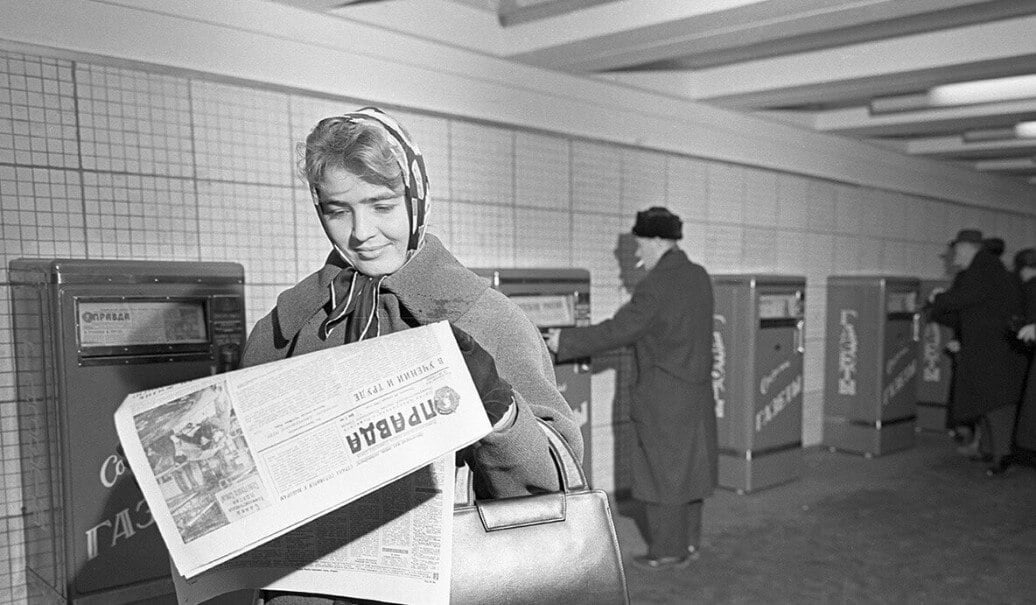 At one time, newspaper machines were also very popular. 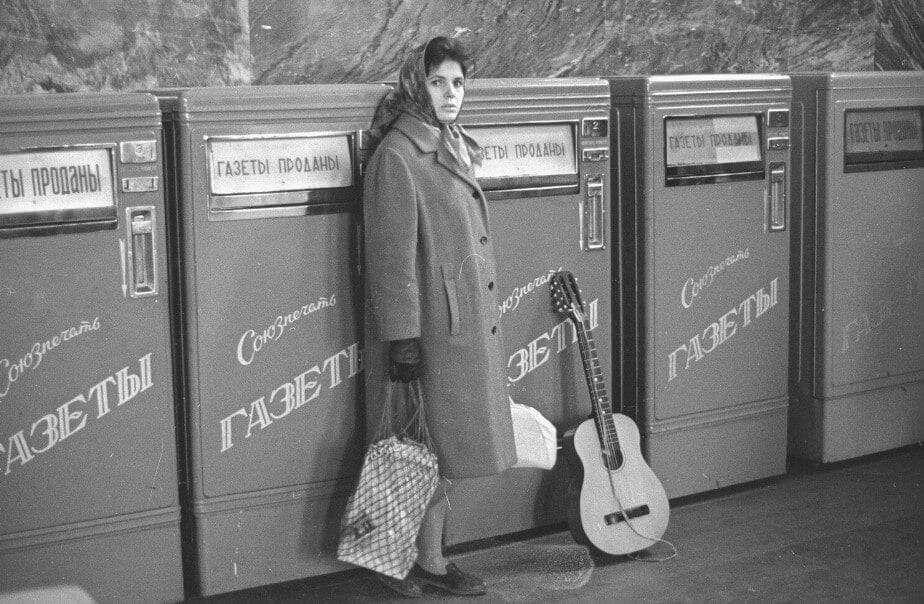 Some time ago, in the subway, one could see modern analogues of such machines with electronic filling. But they were not popular because people have been reading everything on smartphones for a long time. If you are bored in the subway, subscribe to our Zen channel – you will have something to read. 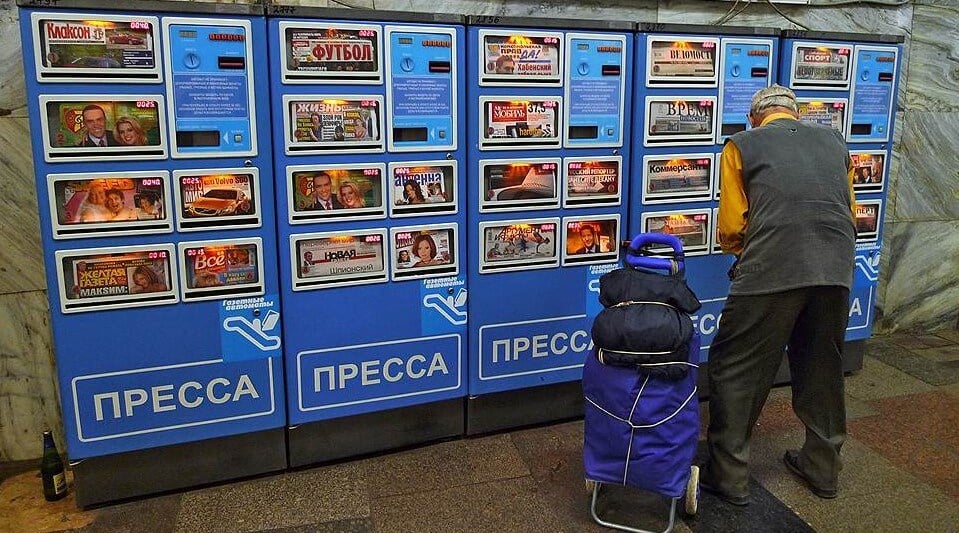 Beer vending machines in the USSR

Of particular note are the Soviet draft beer machines, which were popularly called “autodrinkers”. Most of them did not accept coins – in order to buy beer, you had to purchase special tokens from the cafe or pub cashier. This must have been done so that minors could not buy an alcoholic drink. 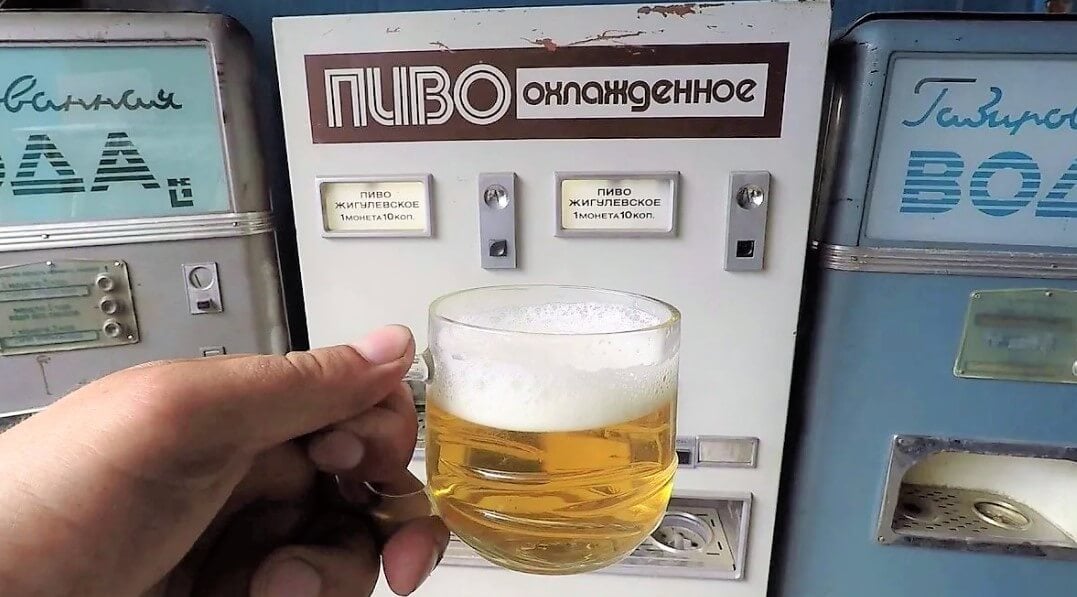 At a time, the machine poured one mug of beer 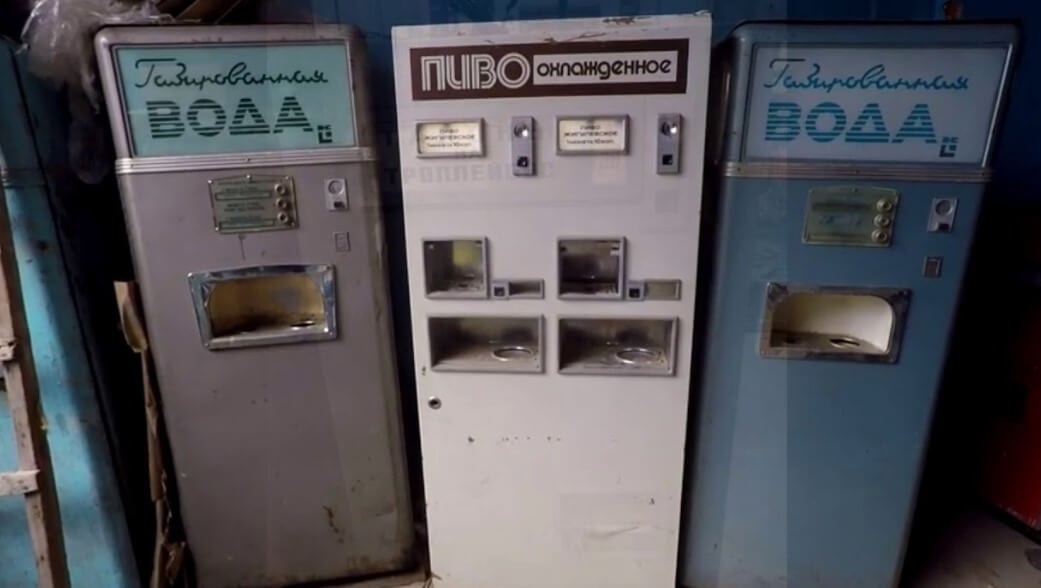 Usually the vending machines were filled with one brand of beer.

Tokens for buying beer were made of yellowish metal and had the inscription “Ministry of Trade of the USSR”. One token had a face value of 10 kopecks, and a mug of beer cost 20, so two tokens were lowered into the receiver. Some machines had a choice between two types of beer, but usually both containers were filled with the same drink. 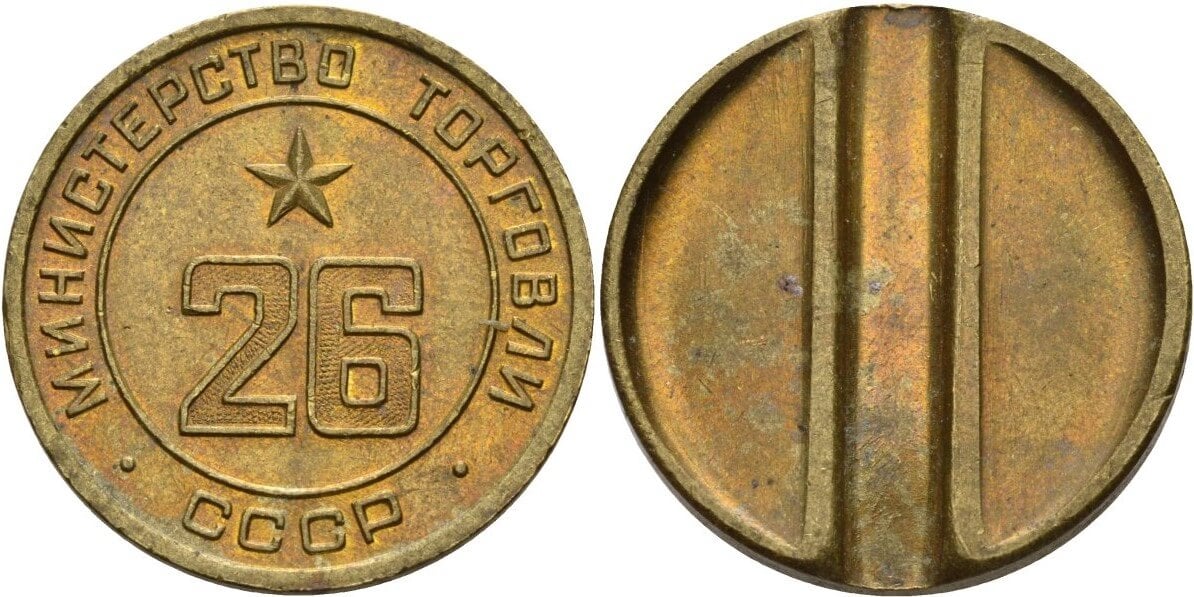 Token for buying beer from a vending machine

Beer vending machines were not widely used because they were very difficult to maintain. They regularly required flushing of the entire system, and were demanding on the installation site – they did not have back and side walls, so they were placed exclusively in places with recesses of a suitable size. In addition, the beer had a short shelf life and had to be poured out, which was extremely unprofitable.

Shop “Progress” in the USSR

In 1962, the Progress store was opened in Moscow, in which there was not a single seller – it was furnished with vending machines. The assortment included about 60 types of products that could be bought for coins in denominations from 1 to 50 kopecks. Store visitors could quickly buy milk, kefir, condensed milk, canned food and other products that did not spoil due to the presence of a refrigerating chamber in the vending machines. 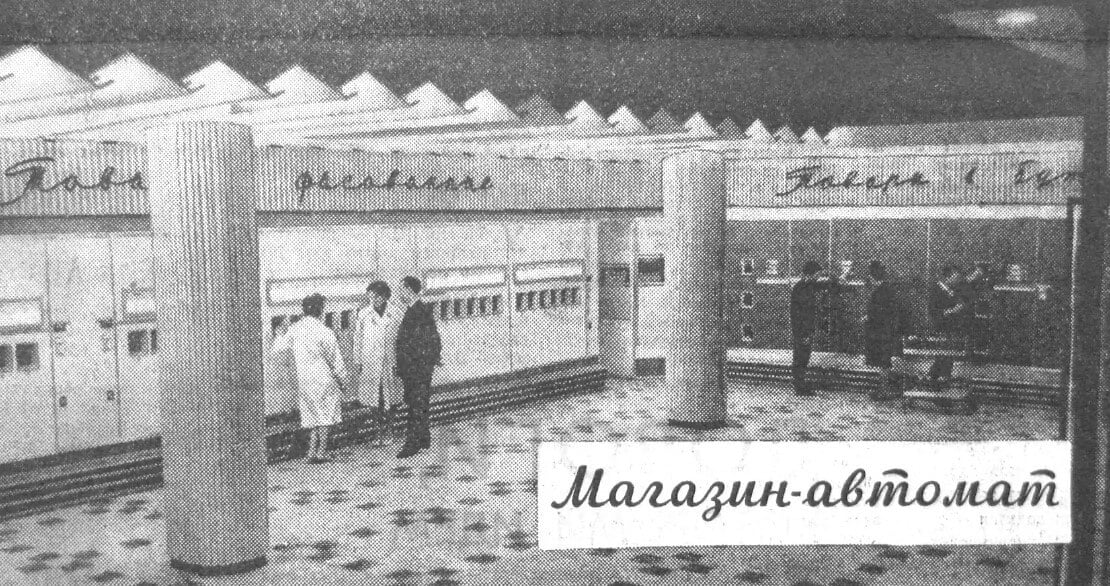 The Soviet media often wrote about the Progress store 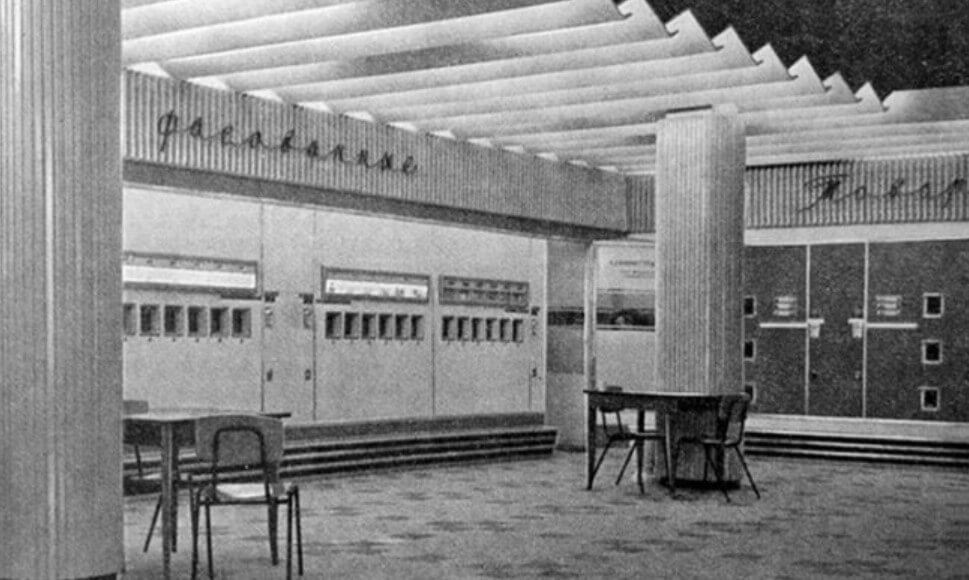 The interior of the Soviet store “Progress” 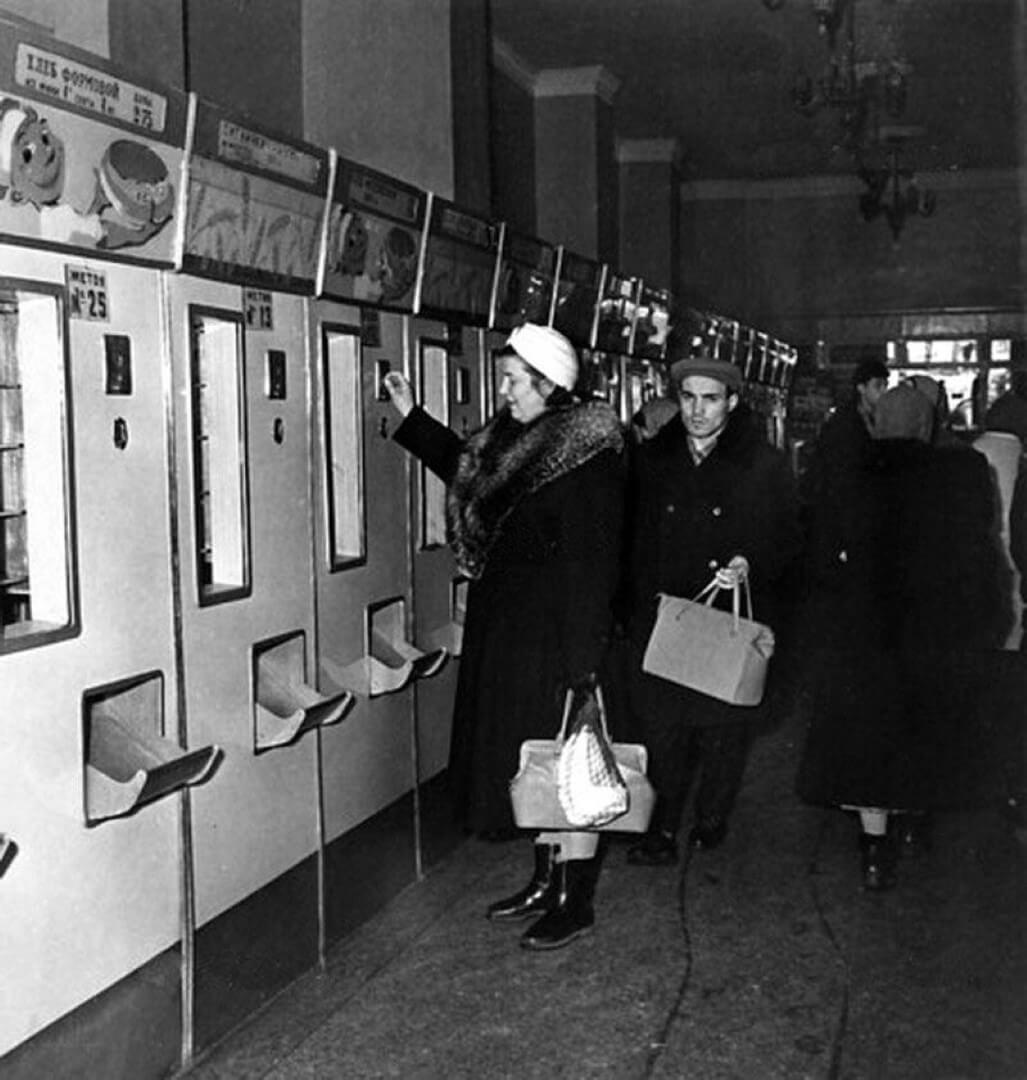 Visitors to the store “Progress”

In what year the Progress store opened, no one knows – the media stopped mentioning it after 1966. Most likely, the store stopped working due to the high cost of servicing vending machines. All of them were unique, and the parts for them were not mass-produced, so in the event of a breakdown, the components were made to order.

Vending machines with sparkling water, beer and newspapers, if desired, could be found in every city. But many people did not see devices for selling matches, pencils and other goods, although they existed. Below we present to your attention photos of rare Soviet-era vending machines. 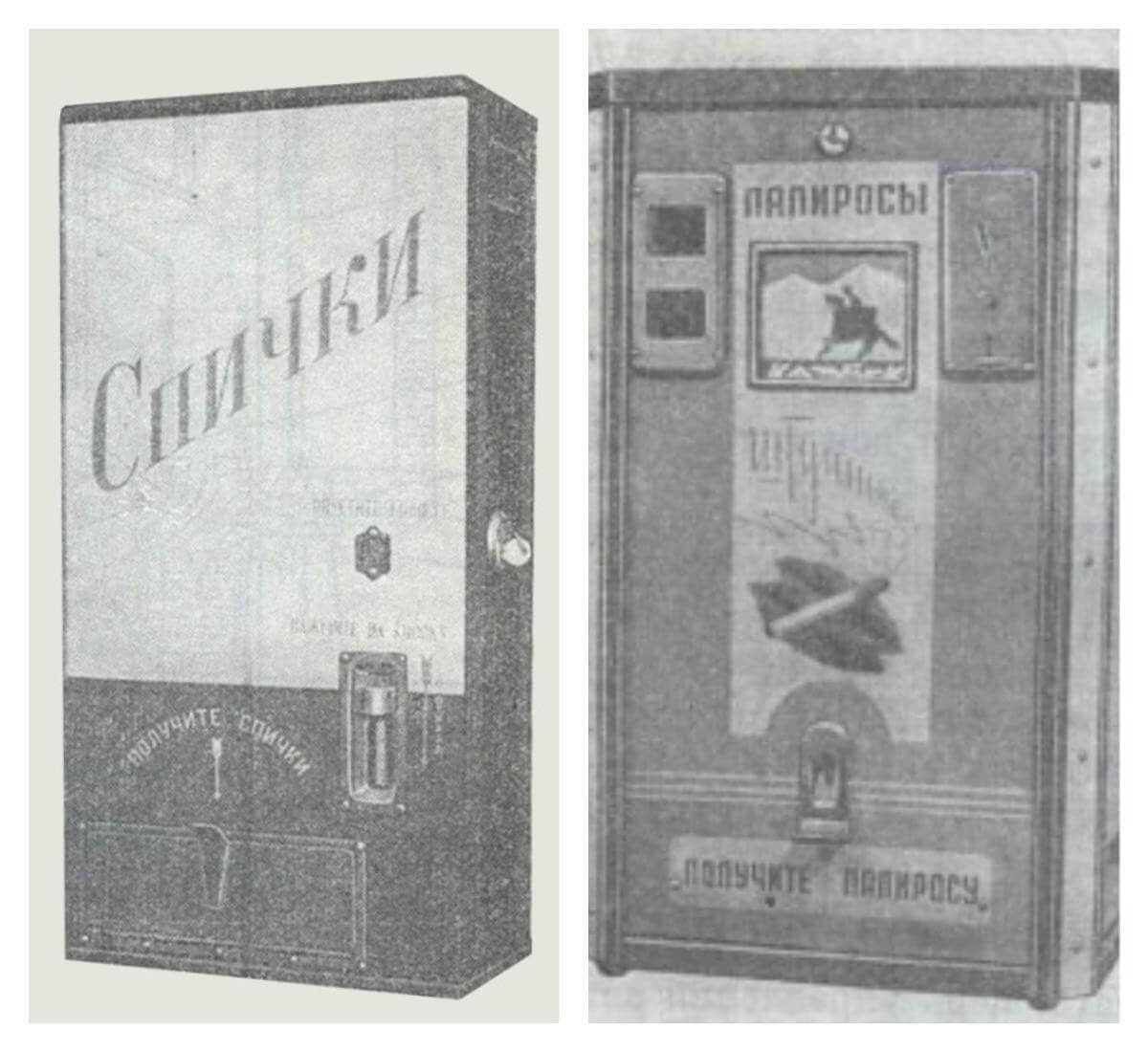 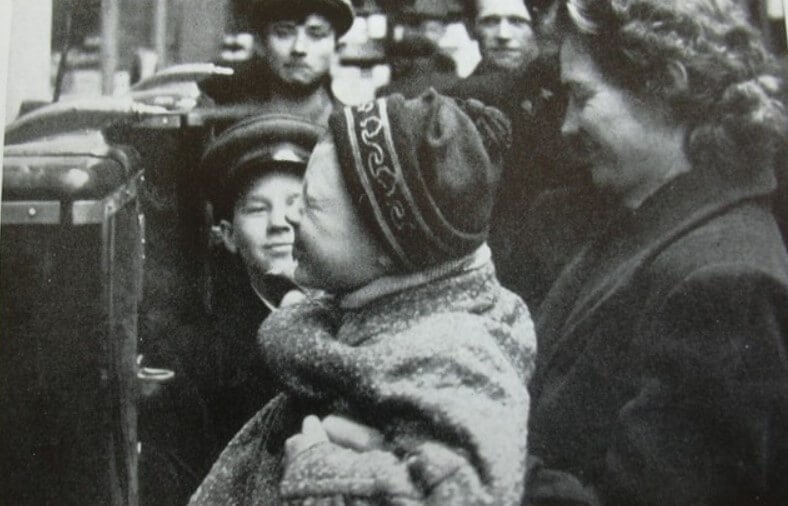 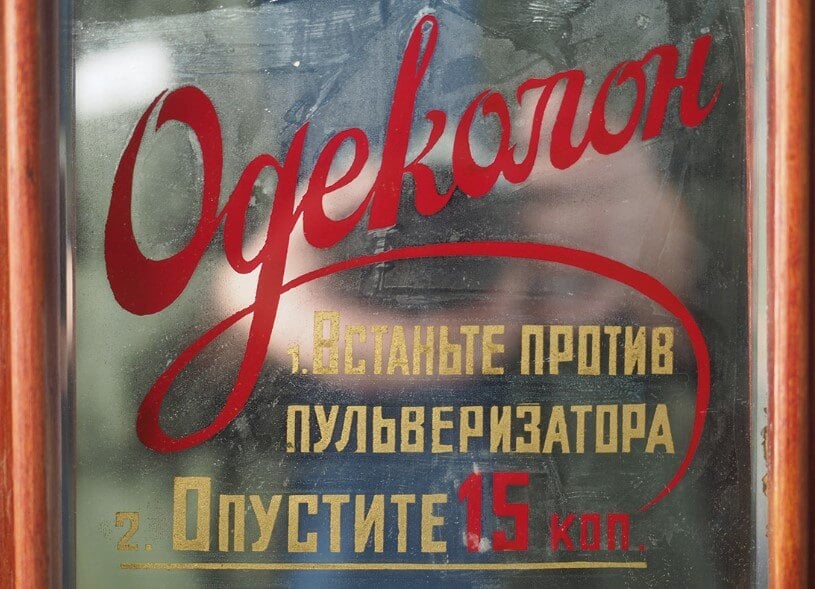 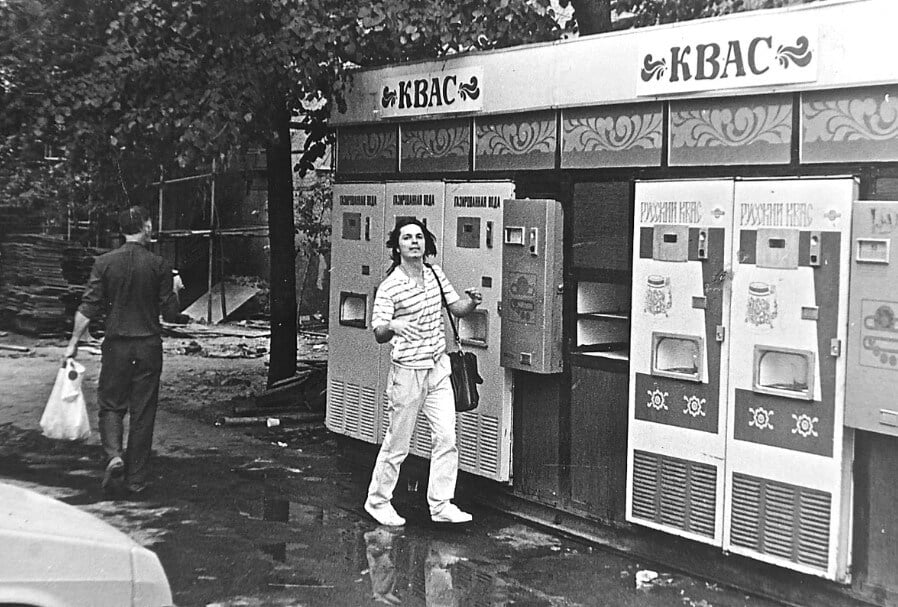 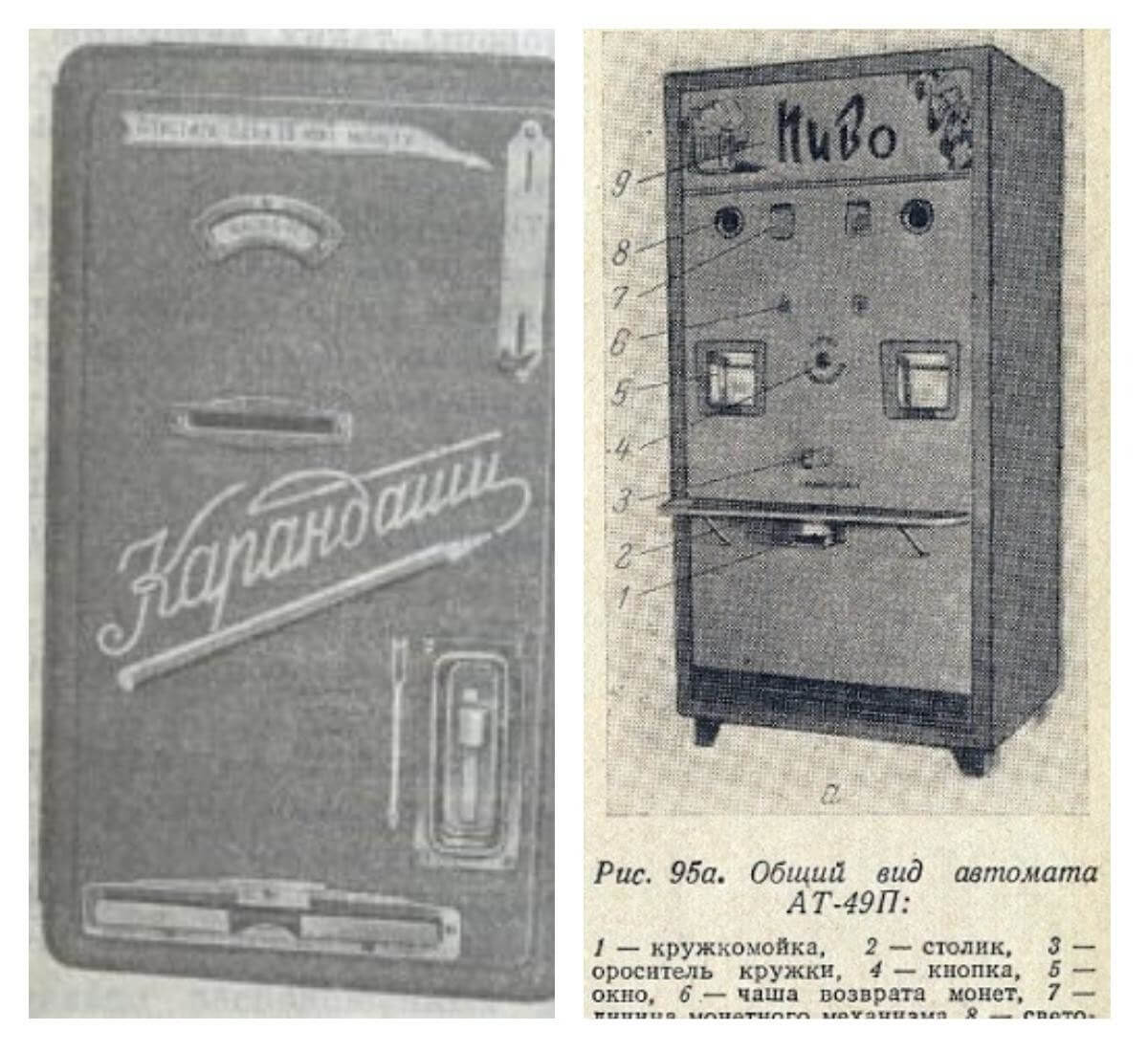 If you liked the article, we recommend reading about the forgotten equipment of the USSR times – everyone had these devices!