Construction of a power plant powered by FSRU begins in Greece

In the city of Alexandroupolis in northern Greece, construction begins on a power plant that will receive gas from a floating liquefied natural gas regasification unit (FSRU). 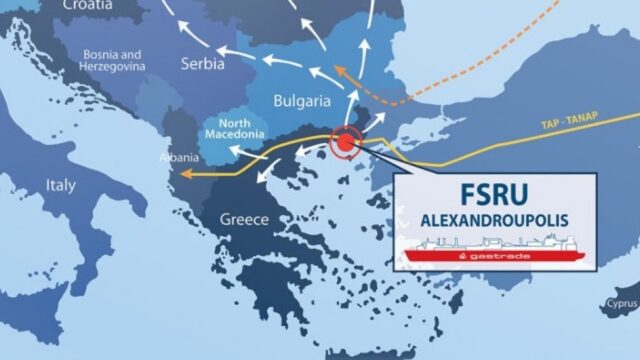 By the end of 2023, the Alexandroupolis LNG regasification terminal with a capacity of 5.5 billion m3/year will be built on the basis of FSRU in the port of Alexandroupolis.

Prime Minister Kyriakos Mitsotakis, at a ceremony marking the launch of the investment in the construction of the power plant, recalled that a few months ago, work was announced in Alexandroupoli on a new liquefied natural gas terminal, which is already under construction at a rapid pace and should be commissioned in early 2024.

“And today I return to Alexandroupolis with double joy as we lay the foundation stone for the most modern power plant in the country, which will be powered by a floating LNG regasification station. Thus, we are taking a double step towards the energy era of tomorrow,” the prime minister said.

According to him, the project is not only geopolitical and economic, but also related to the environment. “The plant, like all new gas plants being built these days, is capable of burning natural gas and hydrogen. Thus, in the next stage, it will be able to produce even cheaper and even cleaner energy. Thus, we are talking about investments that fully serve the purpose of the transition to a green economy. And this is with a capacity equal to three old-style plants operating on brown coal (lignite). These investments will amount to 400 million euros, in 32 months the new facilities will be commissioned,” the Greek prime minister said.

According to him, construction will begin immediately, more than 800 workers will be involved in the construction, and 100 people will be hired later to operate the new plant.

“This is another project that will undoubtedly stimulate the local economy and will be an addition to the large chain of important infrastructures created over 3.5 years in Alexandroupoli,” Mitsotakis said.

In addition, he said that Alexandroupolis is already turning into an important energy hub, which has not only a national, but also a regional, European dimension.

“By the end of this year – the beginning of 2024, FSRU, which will be ready by then, will receive 5.5 billion cubic meters of gas. And from this starting point, the TAP and IGB pipelines will run through the Balkans to supply the region,” Mitsotakis said.

In early October 2022, the Hellenic Energy Regulatory Authority (RAE) approved the Elpedison FSRU project in Thessaloniki, as well as the final phase of market testing of the FSRU-based Dioryga Gas terminal for Motor Oil near Corinth.
The FSRU in Thessaloniki is scheduled to be launched in 2025, but the Dioryga Gas project has yet to be scheduled.

Greece continues to systematically differentiate gas supplies to the country and build regasification hubs to receive LNG from different regions of the world.

The message In Greece, the construction of a power plant powered by FSRU begins appeared first on TEKNOBLOG.