Since the beginning of 2023, Russian fishermen have increased the catch of aquatic biological resources by 16.5%

by Business in Russia
in Agribusiness 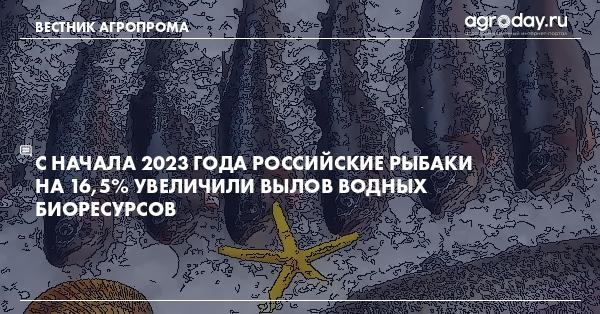 By January 10, 2023, Russian fishermen caught 79.2 thousand tons of fish and seafood, which is 16.5% more than in the same period of the previous year, the Federal Agency for Fisheries reported. In the Far Eastern fishery basin, the catch volume increased by 27% and amounted to 68.8 thousand tons of aquatic biological resources (WBR), in the Northern fishery basin – 5.1 thousand tons, in the Western – 1.8 thousand tons (an increase of almost 2 times), in the Azov-Black Sea — 0.7 thousand tons (+24%), in the Volga-Caspian — 1.4 thousand tons (+45%). In the exclusive economic zones of foreign states, conventional areas and the open part of the World Ocean, the volume of WBR production by the Russian fleet amounted to 1.4 thousand tons. According to preliminary data from the Federal Agency for Fishery, in 2022, domestic fishermen caught more than 4.88 million tons of aquatic biological resources. Updated data will be provided after the collection of statistics on freshwater species after the first quarter of this year, the agency said.

The EAEU is open for cooperation with all countries, preparing for negotiations on the creation of an FTA with Indonesia and the UAE

In Kuban in 2023, about 34 million rubles will be allocated to support greenhouse vegetable growing

The EAEU is open for cooperation with all countries, preparing for negotiations on the creation of an FTA with Indonesia and the UAE

The Eurasian Economic Union (EAEU) is interested in expanding trade and economic cooperation with third countries, continues negotiations on the creation of free trade zones (FTAs) with Iran...

In Kuban in 2023, about 34 million rubles will be allocated to support greenhouse vegetable growing

The governor of the region, Veniamin Kondratyev, told reporters about this. - Now industrial greenhouse complexes in the Kuban occupy more than 250 hectares. This made it possible...

According to Altaikraistat, in 2022, the volume of sales of seeds and fruits of oilseeds by agricultural organizations of the Altai Territory amounted to 814.9 thousand tons, which...

Farmers offered to be fined for improper storage of manure

A fine of up to 450 thousand rubles may threaten agricultural enterprises and farms for violating the requirements for handling livestock by-products. The State Duma will consider the...