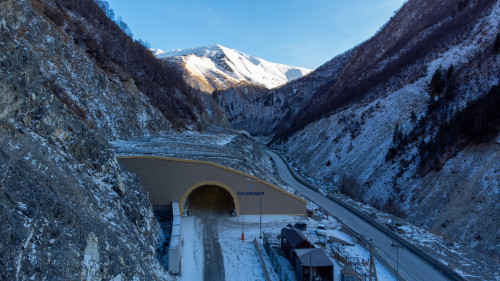 The first facility is located on the avalanche-prone section of the Transkam, the second – on the Vladikavkaz bypass under construction (stages II and III), which is part of the R-217 “Kavkaz” highway.

By order of FKU Uprdor “Kavkaz”, the overhaul of the avalanche facility located at the 90th km of the A-164 highway, more than 800 m long and 4.5 m high, started in April 2020. A waterproofing membrane was installed on an artificial structure – high-density polyethylene sheets. The columns of the gallery were strengthened. To strengthen the slopes, a retaining wall, almost 270 m long, was built from more than 350 bored piles. A road surface made of heavy concrete 20 cm thick was arranged. Engineering systems, video surveillance were repaired, treatment facilities were arranged and elements of arrangement were installed. In addition, they equipped ventilation, electric lighting, automation equipment and fire alarms, as well as installed a telephone connection for prompt calls to a round-the-clock control center.

At the end of 2022, at the entrance to Vladikavkaz from the side of Arkhonskaya, a free parking lot for drivers with an area of ​​90 thousand square meters (600 x 150 m) was opened. The territory is designed for 400 heavy and 250 cars. For the construction of the parking lot, an earthen bed and a pavement base were laid, on top of which three layers of asphalt concrete were laid. They applied thermoplastic markings and laid paving slabs in pedestrian areas. Eight masts of electric lighting were erected, household and storm sewers, playgrounds, gazebos and toilets were arranged. A 24-hour dispatch control center has been created at the parking lot and video surveillance cameras have been installed.

Freight carriers will be able to learn about the state of travel and weather conditions on the way to the border with Georgia, using the variable information board.

– On the transport bypass of Vladikavkaz, continuous electric lighting will be arranged, axial and edge barrier fences will be installed. The main task of the facility is to bring transit transport out of the city, increase the level of road safety and improve the environmental situation, – said Alexander Lukashuk, head of FKU Uprdor “Kavkaz”.

In August last year, the bridge over the Tamisk River at the 35th km of the Transkam was repaired. As part of the arrangement of roads, 8 km of a side metal fence were installed in certain sections of the subordinate network and electric lighting was installed: 300 m long – at the exit to the Khetaga Grove sanctuary on the A-162 Vladikavkaz – Alagir highway and 600 m – at the crossroads near the villages of Khumalag and Tsalyk on the R-217 “Kavkaz” highway. They also replaced the pedestrian traffic light with a traffic one near the Upper and Lower Saniba on the A-162 highway.

On January 31, the head of the Federal Road Agency, Roman Novikov, held a working meeting with Alexander Bedusenko, Director General of the FAA ROSDORNII, his deputies and...

Today at 06:30, the builders successfully completed the operation of sliding the fourth span of the left side of the road part of the Crimean bridge. The movement...

The natural parks of Altai, the resorts of the North Caucasus and the Far East - all this is becoming more accessible to tourists thanks to the comprehensive...