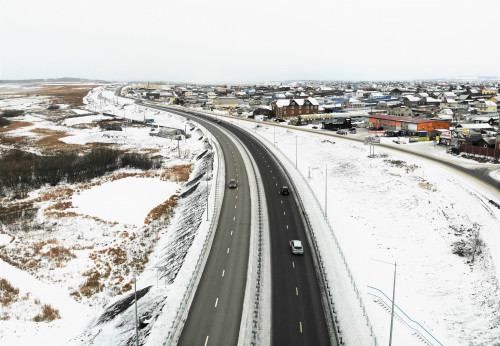 Today, January 18, Saratov hosted the seminar “Diagnostics and Certification of Roads and Bridge Structures as a Basis for Quality Assurance in Planning and Implementation of a Road Works Program: Regulatory Requirements, Methods and Modern Work Technologies”. The event was organized by the RADOR Association and the Ministry of Transport and Roads of the Saratov Region.

The first day of the seminar was attended by Renat Gainetdinov, Deputy Director of the Department of State Policy in the Field of Road Facilities of the Ministry of Transport of the Russian Federation, Radik Farazutdinov, Head of the Department for Regional Development and Implementation of the National Project of the Federal Road Agency, Alexey Petaev, Minister of Transport and Road Facilities of the Saratov Region, and representatives specialized departments and educational institutions.

During the event, the participants discussed the updated quality system for organizing work in the planning and implementation of the facilities of the national project “Safe High-Quality Roads”, assessing the transport and operational condition of roads and bridges, as well as staffing the transport industry.

Renat Gainetdinov spoke about the legal basis for the diagnostics of roads, and about the quality parameters of the road network required in the framework of the national project. Every year, the road management authorities of the regions submit data on the state of their network to Rosavtodor, however, in 2021-2022, not all subjects carried out instrumental diagnostics, limiting themselves to an expert assessment of the state of the road network.

Therefore, last year the Ministry of Transport of Russia worked out the issue of fixing in agreements with the subjects of obligations to carry out instrumental diagnostics of roads and assess the technical condition of artificial road structures.

“Thus, starting from this year, instrumental diagnostics is mandatory, and we expect to see reports from all subjects at the end of the year,” said Renat Gainetdinov.

In turn, Radik Farazutdinov noted that quality issues have always been a priority, but now, given the rapid growth in the volume of road works, they come to the fore.

To form effective management in the road sector of the constituent entities of the Russian Federation at all levels of the budget system, the program “Updated Quality System” was developed. It will make it possible to competently draw up regional plans for road activities, develop a backbone road network, and increase the efficiency of investments in the road funds of the subjects.

After the concept was approved, the program was tested in three pilot subjects of the country, during which an analysis of the quality control system was carried out with an immersion in the problems of each region. As a result of the work, 224 monitoring objects were analyzed. On the basis of the data obtained, the specialists developed methodological foundations for the implementation of the program, which have already been tested in 12 regions.

“In 2023, we plan to consolidate the experience gained and accumulated materials and implement the program throughout the entire territory of the Russian Federation. With each region, we will be able to talk substantively and help methodologically and with the involvement of various structures to ensure an additional improvement in the quality of road works,” said Radik Farazutdinov.

The Minister of Transport and Roads of the Saratov Region spoke about the volume of road works carried out in the region and how their quality is controlled. Thus, last year the total amount of funding for road activities amounted to almost 17.8 billion rubles. 117 sections of roads with a total length of 678 km were brought to the standard state. Also, five sections of roads 9.3 km long were built and reconstructed, eight artificial structures were repaired and two bridges were reconstructed. In addition, in 2022, the region completed the first stage of construction of the overpass in Tatishchevo and began construction of the second stage, as well as began the construction of an overpass in the village of Jasminny in Saratov.

This year, the total amount of funding for road activities within the framework of federal programs in the Saratov region will amount to more than 9.3 billion rubles, of which almost 4.3 billion are federal budget funds, the rest is from the regional budget. It is planned to use these funds to bring 26 sections of roads with a total length of 299 km to the standard. In addition, the construction of the second stage of the overpass in Tatishchevo and the overpass in the village of Zhasminnoye will continue, it is planned to begin construction of a bridge across the Bolshoy Irgiz River on the Gorny-Berezovo highway, the reconstruction of three bridges, as well as the repair and overhaul of seven artificial structures.

Alexey Petaev noted that special attention in the region is paid to instrumental diagnostics on an ongoing basis. So, last year, state contracts were signed for its implementation for about 1000 km, as well as for the acceptance diagnostics of 90 sections of regional roads with a length of more than 650 km after repair.

He stressed that the correct diagnostics of the condition of the roads is necessary to assess the real amount of work, which in turn contributes to effective planning and competent distribution of funds for repairs and overhauls in subsequent years.

Today, specialists have successfully completed the sliding of the third span of the left road part of the Crimean bridge.

Moreover, on 5 km of them, in the Ovyursky district, work was underway on overhaul. Also, three bridges were brought to the standards. As part of the overhaul...

In 2022, FKU Uprdor Kavkaz overhauled 12 km on the route segment Ipatovo - Svetlograd of the R-216 highway and the section from the exit to Novoblagodarnoye to...