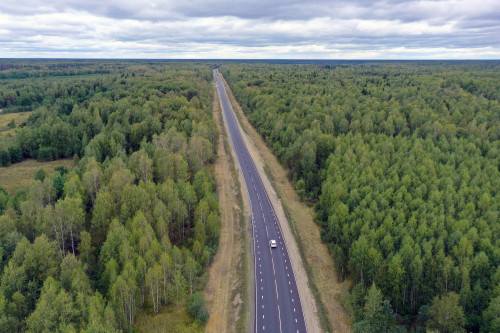 On the M-7 Volga, the transport and operational characteristics of the road surface were restored at 30 kilometers. Scheduled repairs took place on the section from 118 to 133 km in the Petushinsky district. At 15 kilometers of the route, the road workers completed the work on milling the old asphalt, laying a leveling layer and laying a new coating of wear-resistant crushed stone mastic asphalt concrete. The infrastructure of the road has been updated along the entire length: the barrier fence has been replaced, the drainage system has been repaired, the roadsides have been strengthened, new road signs have been installed, markings have been applied.

In the Kovrovsky district, two reversal loops are equipped on the 232nd and 233rd km in the Drozdovka region and on the 241st and 242nd km between Pestovo and Senino. The length of each one-level interchange is about 1 km. They will increase the capacity and improve the situation with traffic safety on the road section, where more than 20 thousand cars pass per day. Near Senino, on the 243rd km, a 24-meter bridge across the Arga River was also repaired.

Measures for the arrangement of wear layers took place on sections of the road from the 144th to the 150th in the Sobinsky district and from the 271st to the 279th km in the Vyaznikovsky district. Similar work was carried out on 45 kilometers of the R-132 Golden Ring highway: we are talking about sections from 312 to 336 km from Verigino to Krasnoye Ekho, from 349 to 365 km on the bypass of Gus-Khrustalny, as well as from the 403rd to the 409th km near Velikodvorskoye.

In Vladimir, the pedestrian underpass located on the 15th km of the P-132 Golden Ring highway, the western connection with the M-7 in the Yuryevets microdistrict, has been overhauled. In addition, M-7 Volga has two modular elevated pedestrian crossings at km 160 in Vorsha and at km 298 near Bolymotikha. Artificial structures replaced ground crossings, which made it possible to remove traffic signal regulation and eliminate potentially emergency areas. Seven ground pedestrian crossings were brought to modern safety standards: lighting, new illuminated signs and T7 impulse traffic lights were installed on the M-7 Volga highway in Alekseevka at 252 -m km, Pavlovsky at the 255th km, Kourkovo at the 287th and 288th km, at the turn to Chiku at the 289th km. On the R-132 “Golden Ring”, the western connection with the M-7 in Vladimir was modernized at the 16th and 18th km.

This year, large-scale work was carried out to update the elements of electric lighting lines on the M-7 highway. Exhausted or damaged equipment was replaced at 17 sites: in Pokrov, Annino, Petushki, Lipnya. On the bypass of Vladimir, new lamps were installed at traffic interchanges near Konyaevo, Baigush, Penkino, as well as on bridges across the Klyazma and Sudogda. On the R-132 “Golden Ring” highway in Vladimir, the lamps were replaced in the Yuryevets microdistrict, at the traffic police post, at the intersection of Moskovsky highway with st. Lenin and at the turn to Suzdal. Also, new lights were mounted in Bogolyubovo, on the overpass in Lemeshki, on bridges across the Nerl and Klyazma (in the direction of Vladimir). In total, more than 2.6 thousand lamps were replaced.

The new lighting was installed on P-132 “Golden Ring” in the village of Torchino, Suzdal region and on the site of the eastern connection with M-7 in the villages of Dvoriki, Khokhlovo, Novaya Bykovka, Kameshkovsky region. In total, specialists installed more than 6 km of lines.

More than 60,000 anti-glare screens have been installed on 40 kilometers of the M-7 highway: on the bypass of Vladimir from km 216 to 222 and on the most dangerous sections of the road from km 247 to 308 in Kovrovsky and Vyaznikovsky districts. Work also continued to equip federal highways with elements of an intelligent transport system. Seven sections of M-7 Volga and R-132 Zolotoe Koltso have been equipped with modern digital traffic metering systems.