The story of the strangest volcano in the world

Supervolcanoes: The Surprising Truth About the Universe’s Most Mysterious Geological Formations by volcanologist and science journalist Robin Andrews is published by Hummingbird. “Snob” publishes an excerpt from the chapter “Giant Inkwell” 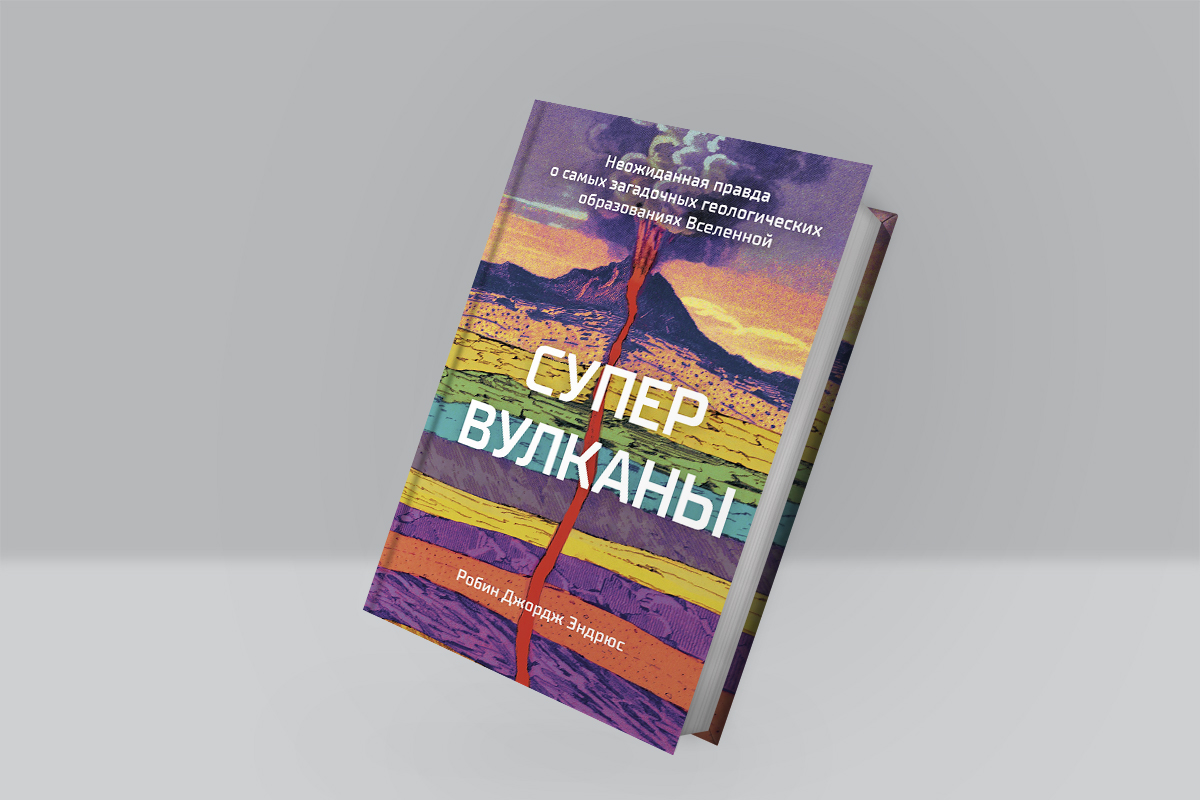 Tanzania, 2005 An international team of scientists and a few local Maasai guides climbed into two Land Rovers and raced through the pitch darkness. The hills and valleys around them faded into shadow, and the headlights of the cars illuminated desert browns and green patches. At midnight they reached the base of the volcano, which rose sharply into the sky. Equipped and grabbing gas recovery equipment, they began to climb. Huge fissures and sudden collapses were no problem, the explorers carefully overcame steep rocky slopes and made their way to the top, arriving just at the moment when the sun came out.

“I didn’t look at the photos and images ahead of time because I wanted to experience genuine surprise,” says University of New Mexico volcanologist and geochemist Tobias Fisher. What an exposure. As soon as you reach an altitude of 3000 meters above sea level and climb to the outer edge of the volcano, you are greeted by a landscape that seems to have come here from another universe. “When you go over the edge, it’s just amazing, completely unlike anything I’ve ever seen,” Fisher shares his impressions, “everything seems so unusual.”

Fisher and his colleagues saw lava seething in the crater, but it looked like it was contaminated with ink. It did not have the classic red, orange and yellow hues. Instead, a black liquid flew into the air, which quickly cooled, mixed with the atmosphere and became a silvery white. Gornithos, single-coloured knobby cones 15 meters high, resembling the pottery of a drunken demon, spewing black lava in all directions from a multitude of tubes and holes. Normal lava can move at different speeds, but on a flat surface, most lava flows are easy to overtake. Despite the resemblance to motor oil, this lava was more fluid than water and sloshed like it was late for a job interview. It was cold, too, by lava standards, of course. The basalt escaping from Kilauea was heated to nearly 1000°C. And this lava, fresh from the mine, erupted at a temperature of 500 ° C, which is only five times hotter than the water that boils in your kettle. Sometimes lava flows out of the gornithos and cools so quickly that it freezes in the air, creating dim cascades, as if stopped in time.

Camping at the summit and holding tubes and bottles to collect the gas over the vents and fissures of the volcano, the scientists watched as the black soup sloshed out of the gornithos and swept just a few meters away. “It’s incredible how fast he moved,” Fisher says, shaking his head in disbelief. – It was scary! We didn’t know what might happen or how close we could get.” At some point, “the lava blew its way through, flowed over the edge of the caldera, or the rim of the crater, and then set fire to the vegetation.” At night, a lava flow, barely lit by a dim red glow, suddenly made its way down the slope into the kitchen area of ​​the camp: everyone quickly packed up and moved to another place.

From a glasshouse in Zyuzin to the first vineyard

Most magma or lava contains a fair amount of silica, a substance made up of one silicon atom and two oxygen atoms. Silica likes to combine into long chains that form a kind of lava skeleton, and the more silica chains, the more resin-like the lava is. Basalt, like in the large and deep Yellowstone reservoir, has a low silica content, so it is quite fluid. Rhyolite, which is found in the small and shallow Yellowstone reservoir, is more than two-thirds silica, making it very viscous and thick.

However, there is so little silicon in the black lava of this volcano that it flows faster than the discharge from the nose of an allergic person. Known as carbonatite, it is rich in (among other things) sodium and calcium carbonates. You are probably familiar with the latter – it is made up of limescale inside the kettle or around the water tap. Naturally, scientists want to answer the following question: where did this carbonatite come from? We have nothing to compare with, because today this mountain is the only volcano on the planet that erupts carbonatite lava. 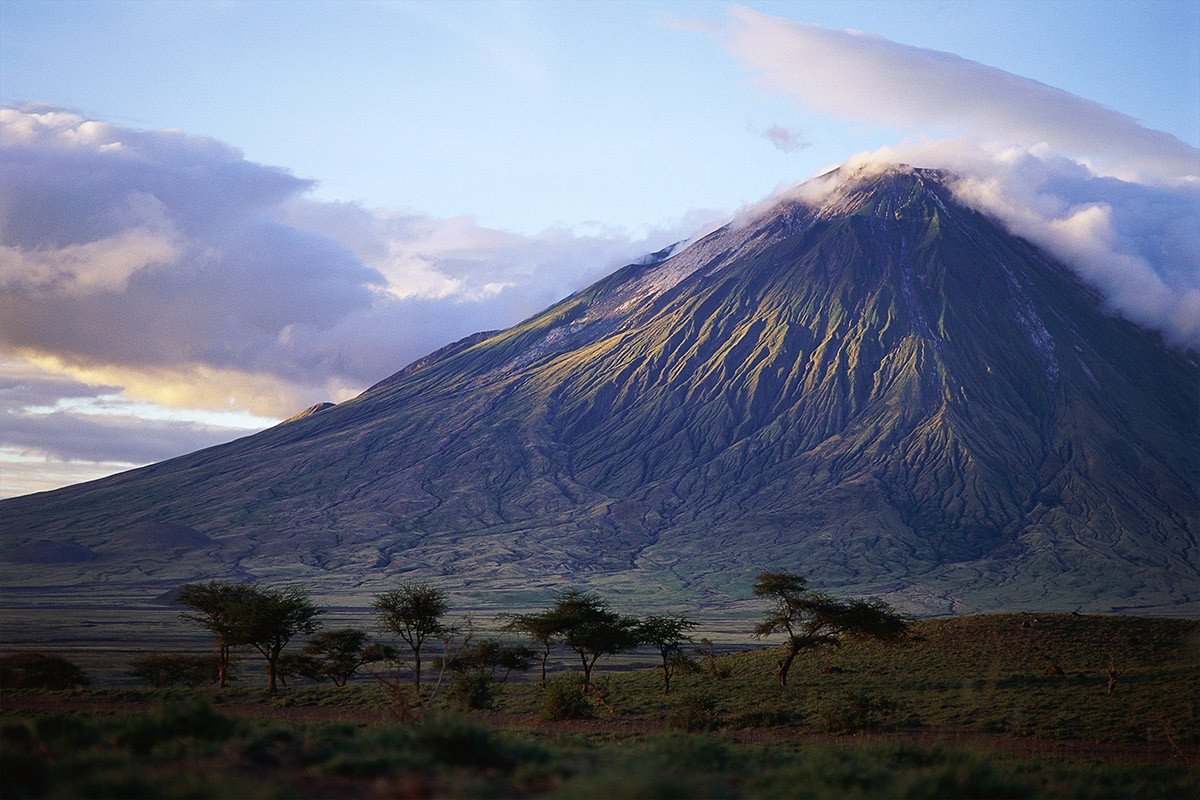 And there is nothing to argue about. Ol Doinyo Lengai is not just the strangest volcano in the world, it is one of the most unusual volcanoes in the entire solar system. The reason for its uniqueness is that this volcano plays the role of a cog in a much larger machine that is transforming the Earth with its amazing geological creativity. Under East Africa, amazing processes are taking place that give rise to volcanoes and support habitats for very unusual, almost alien life forms.

Known to the Maasai people for countless generations, this volcano has long been spoken of by Arab traders as well. In one of the stories of 1870, one of them named Sadi described the peak as follows: “It is either the color of gold, then white, like silver, and then black again.” In 1855, Ol-Doinyo-Lengai first appeared on a map drawn by two missionaries. One of the names they gave to this volcano is “Snow Mountain”. However, in fact, they did not see snow, but black lava, cooled by currents of moist air.

There was also an Engai option. For the Maasai, this word means “god” and “rain”; Ol-Doinyo-Lengai means “Mountain of God”.

When Western explorers began climbing to the top of the volcano in the early 20th century, they noticed mud seeping rapidly from its slopes, which seemed to settle into a white layer of a salt-like substance. So they described the carbonatite lava of the volcano – this sight was so bizarre that they considered it to be anything but lava. Scientists first descended into the craters only in 1960, when this part of modern Tanzania was still called Tanganyika, and only a year remained before gaining independence from Great Britain. John Barry Dawson, a scientist at the Tanganyika Geological Survey, scooped up some black lava and, in his groundbreaking 1962 study, showed that this strange substance was composed of calcium, sodium, potassium, water, and carbon dioxide.

Ol-Doinyo-Lengai is not just a chemical curiosity. He also suffers from an identity crisis. This baby volcano, which is only 370 thousand years old, is amazingly steep. High, sheer volcanoes can only arise if a very thick, viscous magma escapes from the vent, which fills up the surrounding landscape, accumulates and forms a steep cone. But the black lava of this mountain spreads too far and too thin to form a cone-shaped mountain. Fortunately, most of the volcano’s magma is not carbonatite, but material containing a decent amount of skeletal silica chains, making it sticky enough to create steep slopes.

In other words, this volcano is capable of spewing strange magma of two kinds: superfluid and rather viscous. Thick magma can hold a large amount of gases, preventing them from quietly escaping to the surface. It is worth punching a hole in the cone of a volcano with gas – and all these trapped vapors expand sharply, causing a very powerful explosion. Thus, more viscous magma with more silicon causes explosive eruptions, while black magma manifests itself in the form of lava rivers, ponds and fountains.

The explosive eruptions of Ol Doinyo Lengai, including the recent 2007 eruption, are something special. They are accompanied by loud explosions, huge plumes of ash, and sometimes amazing flashes of lightning and thunder. With each major explosion, the top is often partially or completely redrawn, and a new crater forms in place of a large piece of rock. After each major explosive eruption, the crater fills with black lava. Gornithos form above an active lava pool just below the ground. The amount of black lava in each eruption is different, but always impressive. In 2006, in two weeks, the volcano erupted so much that it would be enough to fill more than 350 Olympic swimming pools.

The surroundings of the volcano are also quite bizarre. A stone’s throw from it, not far from where wild animals graze on the grassy plains, is Lake Natron. Thanks to the same strange chemicals that Ol Doinyo Lengai spits out, this lake is incredibly alkaline. The liquid in it is so caustic that it can corrode various textile and plastic products. However, this does not bother the animals for which the lake serves as a home, from algae to tilapia fish and flocks of flamingos. But when the animals die in the lake, they don’t rot in the hot sun. The sodium carbonate contained in the lake dries up and keeps their bodies from smoldering. The term “mummification” is appropriate here, because the ancient Egyptians used sodium carbonate in their burials.

But the center of all this otherworldly splendor, of course, is Ol-Doinyo-Lengai. Matt Genge of Imperial College London has been studying sparkling particles in volcanic rocks and meteorites. He visited Ol Doinyo Lengai three times. “This is a very strange volcano,” says the scientist. – When you first hear about carbonatites, you think: “So this is something like liquid limestone?” And then you will know that it also erupts.” There are several hundred extinct carbonatite volcanoes in the world, which either protrude above the surface of the planet or are buried under centuries-old geological deposits. But this number pales in comparison to hundreds of thousands of “ordinary” volcanoes, active, dormant or extinct on Earth. And on other planets, carbonatite volcanoes do not seem to exist. Given all of the above, it can be considered a happy accident that mankind witnessed the eruption of such a volcano.

Because of the steep slope, every ascent is fraught with risk, but serious danger remains at the summit. “This is a truly scary place,” Genj emphasizes. “The edge of the crater is between 30 and 60 centimeters across. And on both sides there are steep slopes. Falling from one side, you will find yourself in a crater filled with lava. “And from the outside, a deep abyss gapes up to the very foot of Lengai.” On the left – death from liquid fire, and on the right – from a blow with a blunt object. “I moved almost on all fours,” says Genj.

Apart from the force of gravity, there are many other ways that Ol-Doinyo-Lengai can kill you: an explosive eruption at the top; avalanches of debris that have been thrown down the slope for many millennia; small pyroclastic flows and bursts, which more than once washed the slopes with hot gas and volcanic matter; lakes…