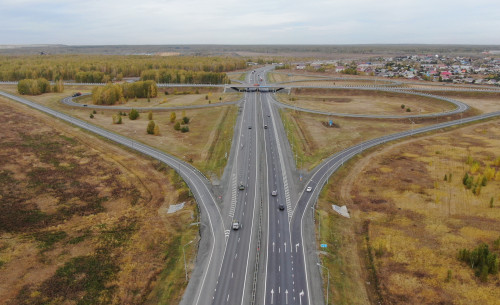 These are the results of the work of FKU Uprdor “Southern Ural” in 2022 in the specified region.

In the past road construction season, a major overhaul of the section of the M-5 Ural highway, the entrance to Yekaterinburg, from km 79 to 121, was completed. It was the last two-lane segment connecting two metropolitan areas – Chelyabinsk and Yekaterinburg. For three years, work to increase traffic lanes was carried out ahead of schedule: in 2020, 12 km were put into operation instead of the planned 8 km, in 2021 – 19 km instead of 12.5 km, and in 2022, three months ahead of schedule extended the remaining 9 km. As part of the overhaul, six reversal loops were built on the site, artificial electric lighting was installed, traffic flows were separated by a metal barrier fence, and 14 bus stops were equipped. Upon completion of the work, the transport connection between the two million-plus cities is carried out on four lanes, which made it possible to ensure high-speed and safe travel, reduce travel time and increase the capacity of the road as a whole.

Also in 2022, 77 km of the A-310 highway were updated: work on the construction of wear layers was carried out at four sections in the Uvelsky, Emanzhelinsky, Korkinsky and Etkulsky districts. Specialists eliminated defects in the pavement, strengthened roadsides, and restored pavement. The leveling layer was laid from heavy-duty crushed-stone-mastic asphalt concrete. 14 landing sites were restored on the route and nine new auto pavilions were installed. They applied thermoplastic markings, installed a galvanized metal barrier fence and 1000 signal posts. In some sections, noise strips were set up and sensors designed to measure the temperature of the road surface were replaced.

To ensure road safety, last year five modular elevated pedestrian crossings were installed on the federal highways of the Chelyabinsk region, 16 km of anti-glare screens were installed, 20 fiber-optic signs with LED indication and a traffic light object were installed at the turn to Miass.

We add that in the new road season, work will continue on the overhaul of the M-5 Ural highway in the section from 1780 to 1790 km. Last year, 4 km were expanded, the remaining 6 km will be put into operation next autumn.