From a clean field to a modern complex

As part of the IV Agro-Industrial Farming Forum, organized by the Milk Institute, specialists from livestock farms and agricultural producers visited Agrofirma Zarya LLC, located in the Bogorodsky district of the Nizhny Novgorod region. The breeding plant for breeding the Holstein breed of cattle is one of the leaders in the region in terms of milk production. 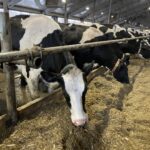 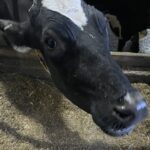 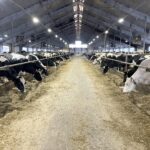 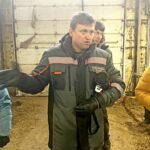 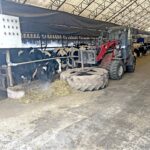 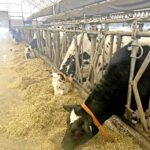 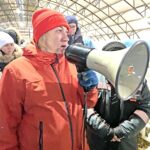 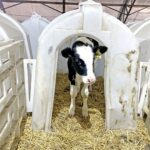 The construction of a dairy complex in the Zarya agricultural company began in 2012. A year later, the first phase was launched, and two years later, the second phase of the project. The complex was erected on a new site, as they say, in an open field. The old farm has also been preserved on the farm, it has been reconstructed and is still working. On the field trip, the forum participants visited a new facility, where they were met by the head of the agricultural company.

“We are very pleased to see such a large group of colleagues at our enterprise and share our experience with you,” said Yury Serednev, General Director of Agrofirma Zarya LLC, to the guests. – I hope you find it interesting.

Expectations were justified. Excursions did not prevent even a strong wind, multiplied by a hard frost. Warmed up on farms, where the temperature was noticeably higher. The participants of the event got acquainted with the work at the most important production sites with interest. In central Russia every year is full of surprises of nature. But whatever the weather, the task of the livestock complex is to get the planned result in any, even extreme conditions.

The total number of cattle in the Zarya agricultural company is 3,000 heads of Holstein cattle. One and a half thousand of them are a milch herd. On average, a forage cow receives 30 liters per day.

The agricultural company cultivates three thousand hectares of arable land, and the fodder harvesting area became the first point of the tour of the enterprise. On the basis of the feed shop, the livestock specialist told how feeding was organized for the new dairy complex and the old farm. The task of the production facility is to fully provide animal feed.

The crusher in the feed shop works the whole working day, about 9-10 hours. The capacity of the unit is 4 tons per hour, but in reality the equipment processes 2-2.5 tons per hour. The ration is developed by an involved company. The correction is carried out by a specialist of the enterprise remotely. The information is sent to the control unit. The adjustment is made for dry matter intake. and the machine operator sees every day how many kilograms of which ingredient he needs to gain.

Distribution is carried out using a self-propelled mixer, which prepares a fully mixed ration in accordance with a given ratio of parameters. In total, 12 rations are used at the complex. The old farm, equipped with tractors with trailed mixers, also feeds from the same feed shop.

Every morning, before feeding, collect food residues. All information is again sent to the control unit, which allows you to make adjustments to the amount of feed required. Feeding on the farm is two times a day. The key is to distribute feed while the animals are being milked so that the cows receive fresh feed when they return.

After the feed shop, the tour visited the milking yards. Each section contains 150 heads of cattle. All sections of the floor, including the transitional galleries where cows step on the hooves, are covered with rubber mats. The supply of water to the drinkers is carried out underground according to the principle of heating in apartments. Water circulates, being constantly heated by heating elements installed both in the pipeline and directly in the drinking bowls. The manager is convinced that in regions with low winter temperatures, pipes must be underground. Otherwise, sooner or later the insulation may be damaged and the water will freeze.

All animals are kept cold. Particular attention is paid to the cleanliness of the bedding. Straw is sprinkled twice a week, and a full cleaning is carried out once a month.

The manure is removed using a scraper cable system. However, the specialists of the agricultural firm are not too happy with it. They explain that cable scrapers damage the hooves, there are cases of punctures and injuries in animals. Next year, it is planned to build the third yard of the dairy complex, in which the manager plans to install another manure removal system.

Waste products flow into the prelagoon, where they are separated. The already clarified fraction enters the lagoons. In spring and autumn, with the help of a hose system up to four kilometers long, about 30-32 thousand cubic meters are pumped into the fields.

– Often we are asked the question, what is more effective: to bring manure into the field through coulters or by spreading-spraying? – said Yuri Sergeevich. – ​We are 100% convinced that it is necessary to apply with the help of a cultivator. The effect is very good.

After the milking yard, the young animals were shown to the tourists. The farm started with 50% calf survival. Now this figure is 98.7%. For drinking, pasteurized substandard milk is used. They work with colostrum by draining, then the calves are on the teats for two weeks, after which they are accustomed to the bucket.

“After the drencher, there are no problems with transferring to the nipple,” explained Maria Kotelnikova, head of the veterinary department at the Milk Institute. – The calf is fairly easy to retrain. Using a drencher is a big plus. In a calf that receives the required amount of colostrum, a full-fledged colostral immunity is formed.

Participants of the event noted a worthy level of equipment of the dairy complex. However, Yuri Serednev himself admits that there are shortcomings on the farm, and there are many things that I would like to improve. The issue is economic feasibility.

“I was once told: “You can build at least a golden courtyard, but the question is when these investments will pay off,” he shared. “Our complex paid off in eight years.

Agrofirm “Zarya” is a breeding plant for the Holstein breed of cattle. The company annually sells 150-200 heifers and accepts applications for animals. There is a one-time opportunity to quarantine a batch of 100 heads, which not every breeding farm can afford.

Agrarians of the Volgograd region decided to dedicate the record grain harvest this year to the 80th anniversary of the Victory in the Battle of Stalingrad. This was...

The results of the implementation of the federal project "Export of agricultural products" in the regions in 2022, as well as the achievement of targets for the current...

In 2022, the agrarians of the Voronezh region produced agricultural products worth 368 billion rubles, which is 111.9% compared to the previous year. The region confidently occupies the...

At the AgroKavkaz-2023 exhibition, which takes place from February 1 to February 3 in Mineralnye Vody, representatives of the Russian Agricultural Bank spoke about the bank's key products...

The estimated potential for cheese exports from Russia to Saudi Arabia is estimated at $5 million per year, according to a review by the federal center Agroexport of...