In Egypt, found a tomb with mummies of crocodiles 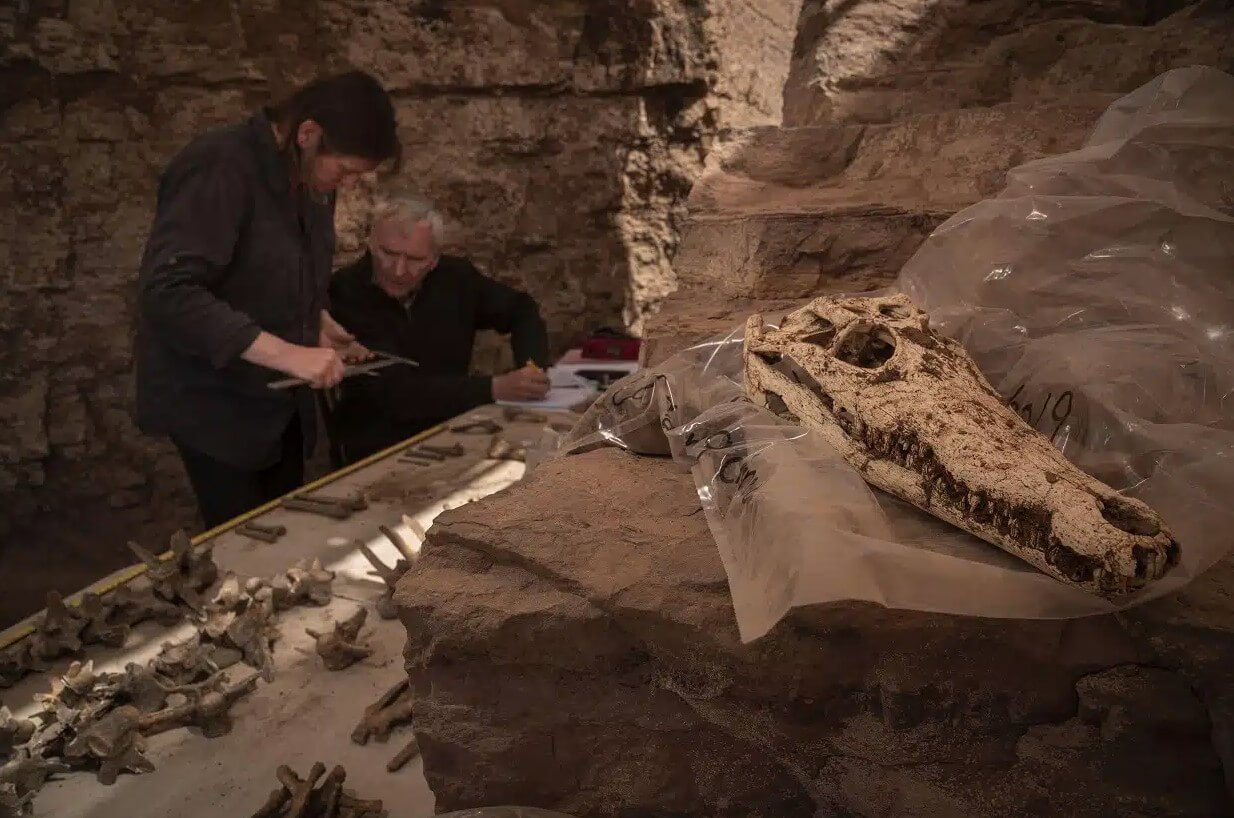 Crocodile mummies have been found in an Egyptian tomb, and scientists already know why they were mummified

When it comes to mummies, most often people think of the mummies of the pharaohs or other important people of ancient times. However, in some cases, even the bodies of animals were subjected to mummification – scientists have already found mummies of lions and cats many times, as well as a statue of a scarab beetle. Usually in ancient Egypt, the bodies of living beings were embalmed, which were associated with different gods and enjoyed great respect. Recently, during archaeological work in the region of Qubbat al-Hawa, a group of British scientists found several crocodile mummies. Why did the ancient Egyptians create the mummies of crocodiles, were they held in high esteem? Let’s find out the answer to this question.

Mummies of crocodiles in Egypt

The mummified bodies of crocodiles were found in a tomb located in the Qubbat al-Hawa region. We are talking about a place near the city of Aswan, on the west bank of the Nile River. Judging by the findings, the tomb was used by the Egyptians for the burial of the nobility and priests from the time of the Fourth Dynasty (the pyramid of Cheops was also built at the same time) until the Roman period, when Ancient Egypt became part of the Roman Empire. 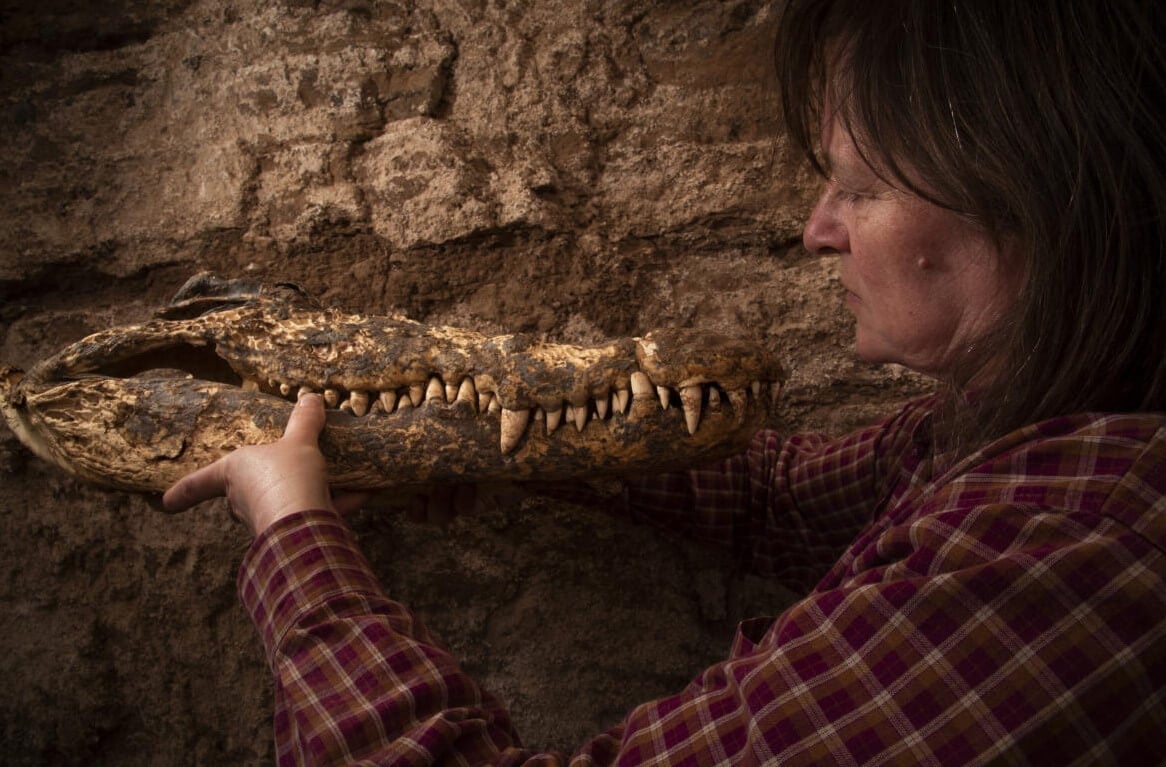 Well-preserved head of a crocodile

In total, scientists managed to find about 100 tombs – the mummies of crocodiles were found in the last of those discovered. In total, scientists found five partially full mummies, as well as five crocodile skulls. According to archaeozoologist Bea De Cupere, in the entire history of archeology, only about 20 burials with crocodile mummies have been discovered in Egypt. Finding a few more perfectly preserved specimens in an untouched tomb is a great success.

How did the Egyptians mummify animals?

All found crocodiles have different lengths from 1.8 to 3.5 meters. The Egyptians made mummies of the Nile crocodile (Crocodylus niloticus) is the largest of the three species of crocodiles found in Africa. It is believed that adults can easily cope with such large animals as a rhinoceros, giraffe, lion, and so on. How exactly the Egyptians caught them is unknown. Also found in the tomb were the mummies of several West African crocodiles (Crocodylus suchus). They are similar to the Nile crocodiles, but differ from them at the genetic level. 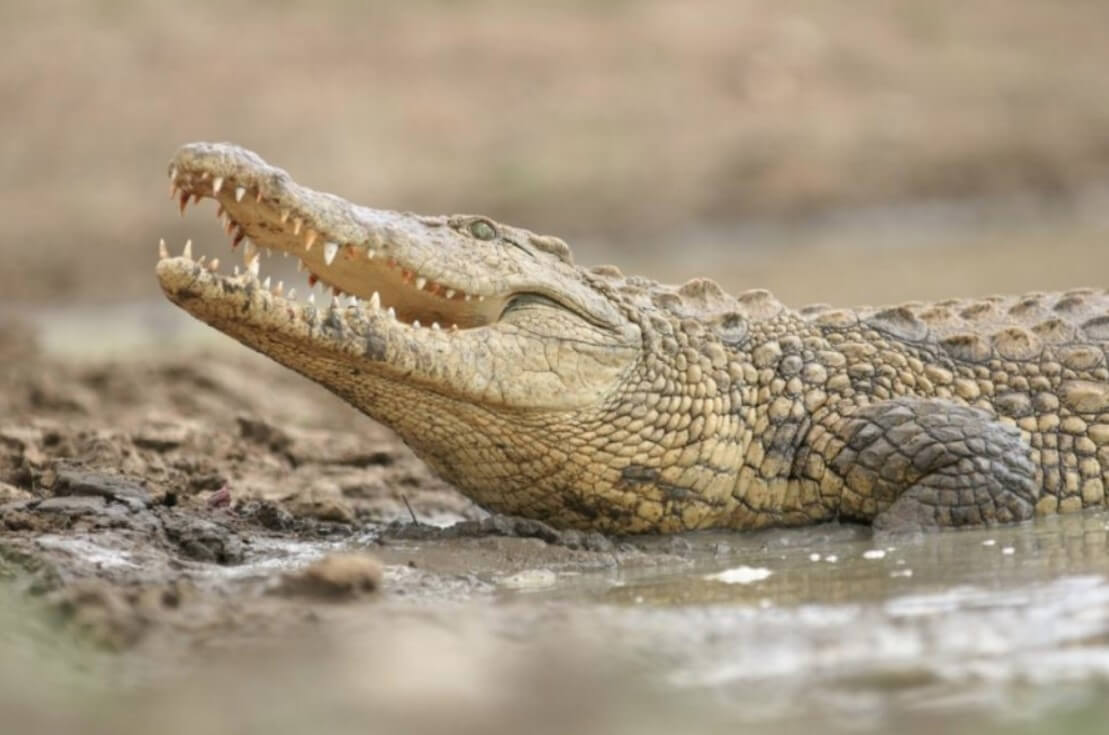 Scientists believe that the crocodiles were originally buried elsewhere, most likely in sand pits. There they dried naturally, after which they were dug up, wrapped in cloth and transferred to the tomb. Some crocodiles are missing body parts – they may have been lost in transit. During the study of the insides, gastroliths were found in one of the crocodiles – these are stones in the intestines, which in life help them maintain balance in the water. They remained inside, which means that before mummification, the Egyptians did not perform an autopsy on crocodiles. 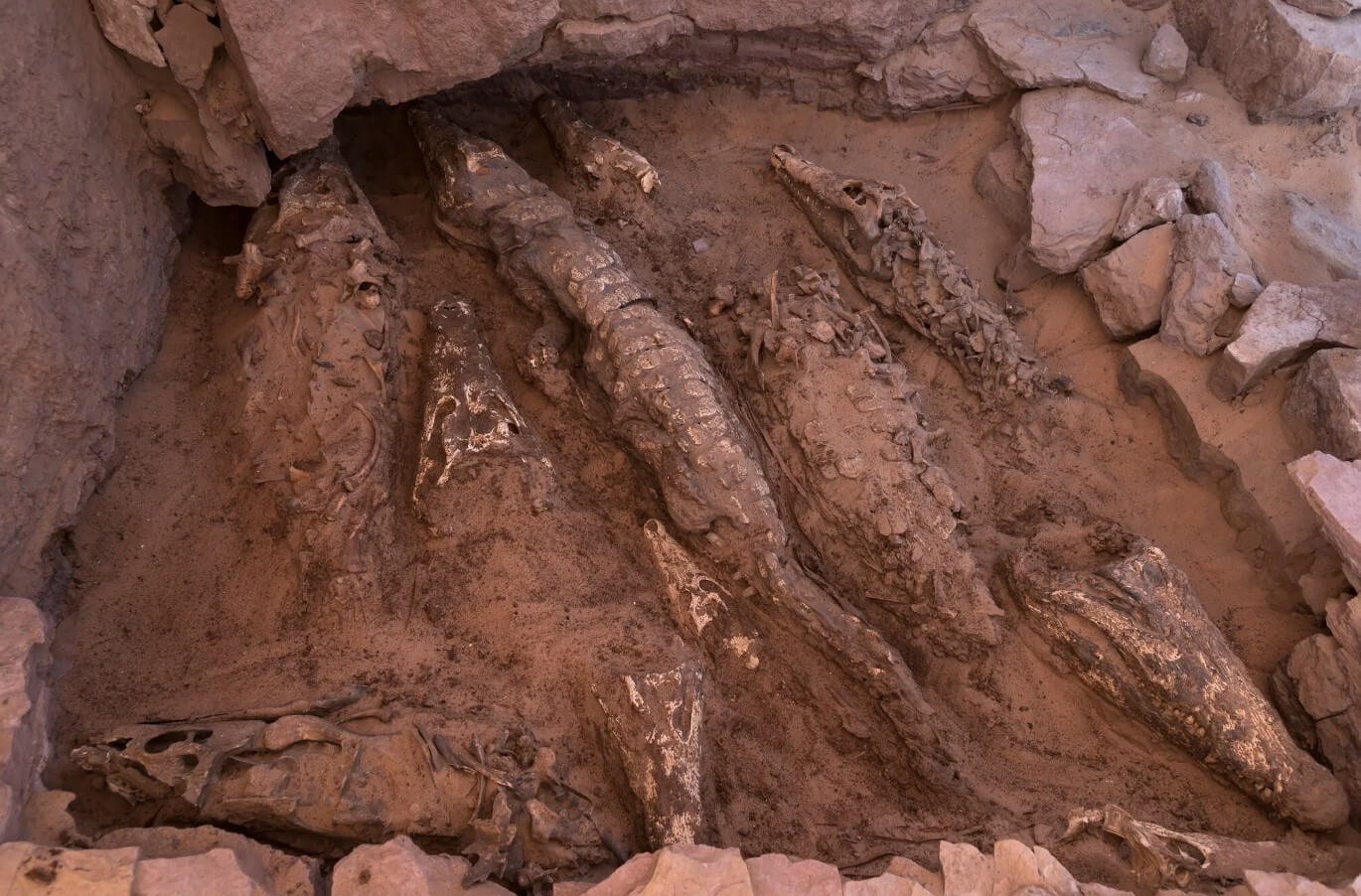 Part of the found mummies of crocodiles 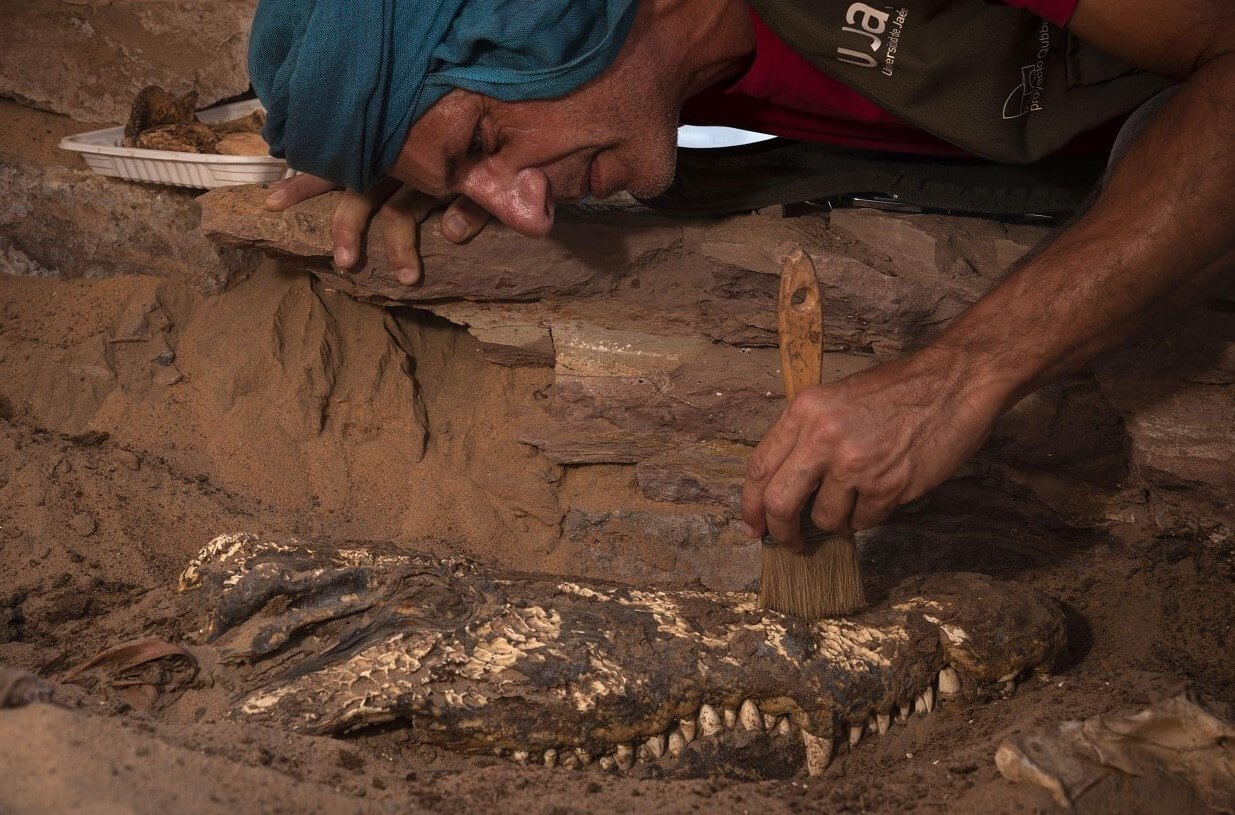 In order not to damage the mummies, scientists have to be extremely careful

So, crocodiles were mummified in Ancient Egypt, but why?

As mentioned at the beginning, usually the Egyptians created mummies of animals that were associated with some kind of god. They associated crocodiles with Sebek – this is the ancient Egyptian god of water and the flood of the Nile River. The Egyptians sincerely believed that Sebek protects them from dark forces and is the protector of both people and other gods. In addition to all this, the deity was associated with the power of the pharaohs, fertility and military prowess. On the walls and papyri, Sebek was depicted as a man with the head of a crocodile. 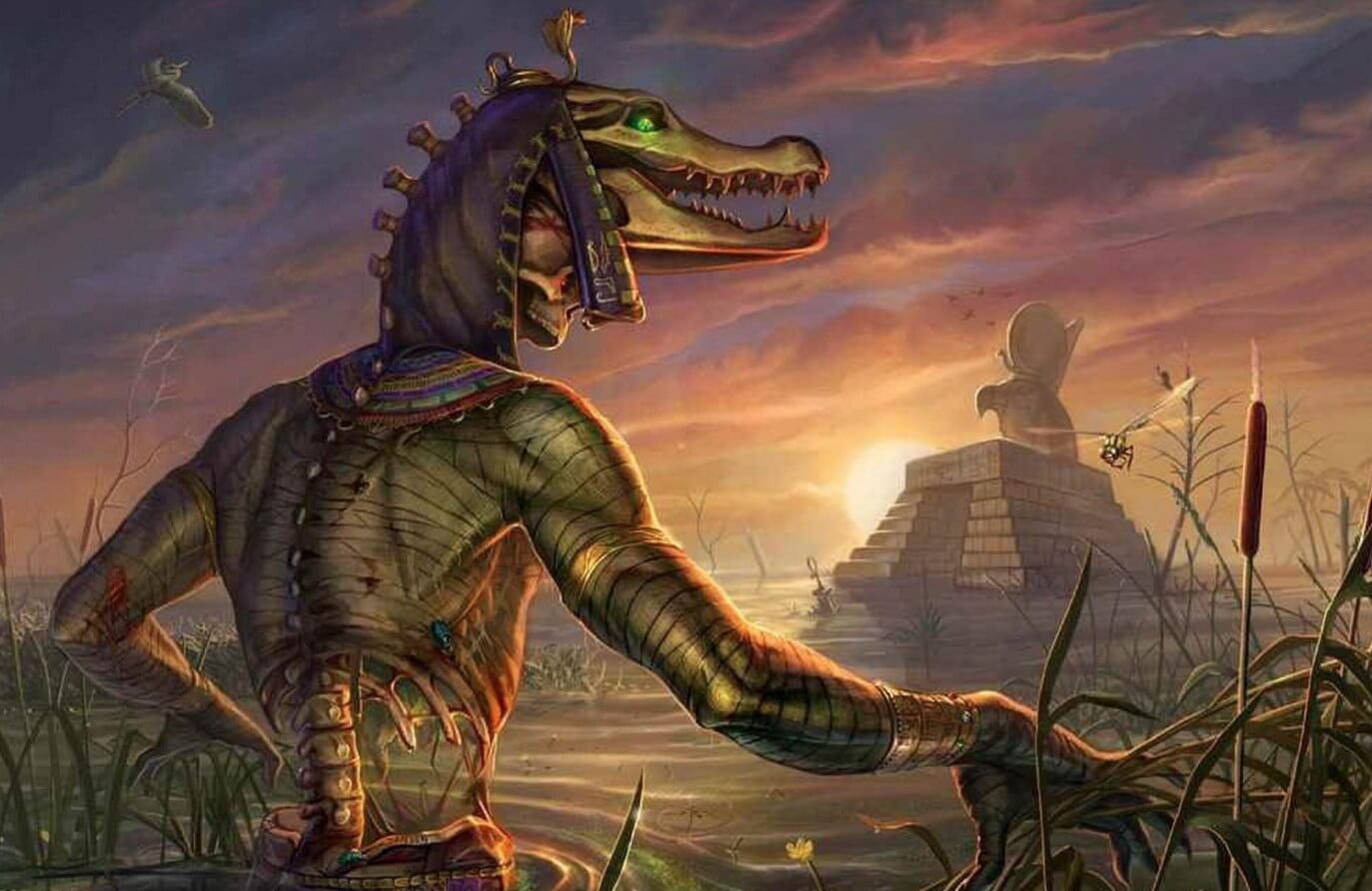 Illustration of Sobek, the ancient Egyptian god of water

An eyewitness to the worship of the Egyptians Sebek was the ancient Greek historian Herodotus. He wrote that if an Egyptian or a stranger was eaten by a crocodile, people who worshiped this god found his body and embalmed him as a rich and respected person. Neither friends nor relatives could touch his body, because the victims of crocodiles were considered something more than a person. Subsequently, even the Roman emperors respected crocodiles – it was believed that one who smeared himself with crocodile fat could safely swim past other individuals. People also believed that the crocodile skin on the gates could protect the building from hail and other natural phenomena.

Thanks to mummies, scientists can tell a lot of interesting things about Ancient Egypt. Relatively recently, they were able to recreate the face of an Egyptian woman by examining her remains – see for yourself what she looked like.