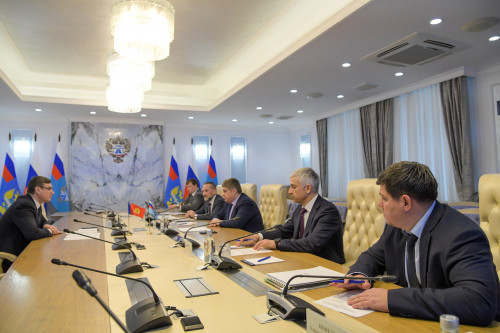 On January 24, a working meeting between the head of Rosavtodor Roman Novikov and the governor of the Vladimir region Alexander Avdeev took place at the Federal Highway Agency.

The event was also attended by Deputy Heads of Rosavtodor Igor Kostyuchenko and Andrey Samaryanov, Head of the Department for Regional Development and Implementation of the National Project of the Federal Road Agency Radik Farazutdinov and Acting Head of the FKU Uprdor Moscow – Nizhny Novgorod of Rosavtodor Alexander Nefyodov.

The parties discussed the results of work on the implementation of the national project “Safe High-Quality Roads” in the Vladimir Region, the progress of the work program on road safety, as well as the prospects for the development of the regional road network.

Roman Novikov noted that the region is fulfilling all tasks on time. “According to the national project, the indicators of the normative state of the regional road network have reached 51.6%, and bringing 85% of the agglomeration roads to the standard is also feasible. Both areas of work are fully funded. I am confident that all planned activities will be carried out. Taking into account the high performance, we will look at how we can improve joint activities,” the head of Rosavtodor emphasized.

In 2022, thanks to the national project “Safe High-Quality Roads” in the Vladimir Region, 60 road sections of regional, intermunicipal and local significance with a total length of 135 km, as well as four bridges, were brought to the normative state.

One of the most significant projects of the last year was the repair of a section of the Yuryev-Polsky – Grigorovo – Gavrilov Posad – Teikovo highway in the Yuryev-Polsky district. Its length was 18.6 km. It carries out transportation between the Vladimir and Ivanovo regions, and also reaches the federal highway P-132 “Golden Ring”.

In addition, large-scale work has been carried out to update tourist routes in the Vladimir region. In particular, five sections of the Murom-Volga highway in the Gorohovets district (11.1 km) and three sections in the Murom district (4.2 km) were repaired. This is not only a passage to the federal highway M-7 “Volga”, but also to Gorokhovets as part of the new tourist route “Epic Way” (Murom – Gorokhovets).

In Vladimir, contractors repaired more than 12 km of road sections. In addition, after numerous appeals from citizens, a long-awaited traffic light object appeared at the intersection of the Sudogodskoe highway and the Vladimir-Ulybyshevo-Konyaevo highway. In addition, construction and installation work under the national project took place in Kameshkovo, Sudogda, Suzdal, Yuryev-Polsky, Raduzhny, Lakinsk, Stavrovo and Sobinka.

This year, in the Vladimir region, according to the national project, they plan to bring over 120 km of roads to the standard.

“In 2022, the Federal Road Agency provided an additional 1 billion rubles as part of the national project. This allowed us to increase the pace and bring a larger percentage of roads to the normative state. I also want to note that thanks to the support of Rosavtodor, more than 11 km of access roads to Suzdal were modernized, this work will be continued this year,” said Alexander Avdeev.

With regard to federal highways, Roman Novikov noted the important task of maintaining the R-132 Golden Ring road in a standard condition. “The Vladimir region is opening the West-East corridor, so close attention should be paid to federal roads passing through it. This is especially true of the R-132 highway, it should become safe for car owners so that people get to Vladimir, Suzdal and in the transit direction with a high degree of comfort.”

Today, specialists have successfully completed the sliding of the third span of the left road part of the Crimean bridge.

Moreover, on 5 km of them, in the Ovyursky district, work was underway on overhaul. Also, three bridges were brought to the standards. As part of the overhaul...

In 2022, FKU Uprdor Kavkaz overhauled 12 km on the route segment Ipatovo - Svetlograd of the R-216 highway and the section from the exit to Novoblagodarnoye to...