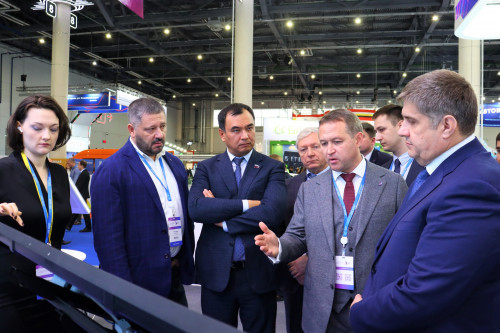 The development and approval of new national standards, the introduction of advanced domestic technologies, the development of intelligent transport systems and advanced training systems for industry specialists – these tasks have always been and remain fundamental for the entire road sector. The past year was a breakthrough in terms of the digital transformation of the road transport complex.

Thus, the share of facilities that provide for the use of innovations from the Register of New and Best Technologies, Materials and Technological Solutions for Reuse (RNNT) has increased. As of the end of 2022, it contains information on 365 technologies, 798 materials, 261 design solutions, as well as 165 manufacturers and more than 600 regulatory documents of the road industry.

Over the past year, experts from the Industry-Wide Competence Center (functioning at FAA ROSDORNII) organized more than 40 meetings dedicated to the application of various advanced technologies. In addition, the analysis of about 500 compositions of asphalt concrete mixtures and 120 sets of design estimates was completed with the issuance of comments and recommendations for their adjustment. At the same time, the number of pilot regions for the introduction of priority new and best technologies in the Russian Federation has increased to 35.

A separate area of ​​work is the development of regulatory documents. For example, in the field of designing cable-stayed, arched and beam systems with spans of more than 150 m, the Federal Highway Agency, in cooperation with the scientific community, for the first time in the world, prepared a unique standard that clearly defines the methods and methods for confirming the aerodynamic stability of bridges – GOST R 59625-2022 ” DAOP. Bridge structures. Rules for calculating and confirming aeroelastic stability.

The development of a national standard for the design of metal corrugated elements (GOST R 59621-2022) was also completed, which contains key design and calculation requirements, and also for the first time offers recommendations for finite element modeling of such elements.

As for the quality control of raw materials and building materials, in 2022 the testing and research laboratory of the Federal Autonomous Institution “ROSDORNII” conducted an analysis of the selection of compositions of asphalt concrete mixtures in the regions of our country. In total, about 500 recipes designed in accordance with GOST R 58401.1, GOST R 58401.2, GOST R 58406.1 and GOST R 58406.2 were analyzed. A number of the most important operational characteristics of asphalt concretes (resistance to rutting, etc.) were studied, 42 programs and methods for certification of testing equipment were developed.

Last year, the industry began to actively introduce advanced methods for testing road structures, which are carried out using the wheel load simulator (SKN) “CYCLOS”. Its development was carried out within the framework of the national project “Safe High-Quality Roads”. With the help of this simulator, the first comparative tests of two types of pavement structures in the Nizhny Novgorod region were carried out on a specially built test site of the fourth stage of the construction of the M-12 high-speed highway Moscow – Nizhny Novgorod – Kazan.

Also in 2022, a pilot operation of the first mobile laboratory in Russia for continuous non-stop diagnostics of roads at a traffic speed (up to 80 km/h) Escandor was carried out (developed by order of the FAA ROSDORNII). With its help, more than 3,000 km of road surfaces were diagnosed in five pilot regions: Murmansk, Kursk, Rostov and Orenburg regions, as well as in the Republic of Tatarstan.

In the past road construction season, for the first time in the last half century, research work was launched to rework the requirements for the design of non-rigid pavements. Rosavtodor has organized a large-scale work to monitor pavement sections using various materials and modifiers. Already now, the complex of works allows to improve the quality of road works and ensure the appropriate service life between repairs with maximum efficiency in the use of resources.

The department provides for the development of an industry road methodological document “Methodological recommendations for the organization of engineering-geocryological monitoring and equipment of engineering-geocryological monitoring stationary posts in the right of way of roads in the permafrost zone.” Last year, federal road workers equipped two monitoring posts on the highways A-331 Vilyui (km 75) and R-297 Amur (km 288). In 2023, it is planned to install similar systems on the A-360 Lena (km 1,050) and R-504 Kolyma (km 1,955 – km 1,960) highways. Specialists are completing the collection of technical information and its analysis, at the moment editorial changes are being made to the methodological document based on these data.

Research continues on materials of the class “Super-strong fiber-reinforced concrete” for their further application in bridge building. They allow the development of special technical solutions, usually with significantly lighter structures. Currently, the development of this area is significantly hampered by the lack of a regulatory framework. Rosavtodor is actively involved in its development.

In 2022, FAA ROSDORNII specialists completed the development of the Concept for the Functioning of Intelligent Transport Systems (ITS), as well as prepared proposals for updating three national standards, drafted seven national standards and a draft federal law on the national ITS network.

To ensure the possibility of conducting experiments and testing technologies, the first pilot zone in Russia is being created on the territory of the Republic of Tatarstan. Technical solutions for the placement of specialized equipment and the laying of line-cable structures have already been developed and agreed upon, and estimate documentation for the creation of the appropriate infrastructure has also been prepared.

The development of professional competencies was not left without attention: in 2022, large-scale work was carried out in the field of personnel training. 4,819 road workers were trained under 19 advanced training programs at the site of FAA ROSDORNII (58.44% of employees aged 18 to 35). The annual target was almost doubled. Also, 38 familiarization and information events were held on topical issues of the road sector, the total number of participants was 5,870 people (another 3,073 people watched the recorded webinars).