A huge number of precious stones were found in the Martian crater – News of space, astronomy and astronautics

Researchers studying images taken by the Curiosity rover have discovered strange structures on the surface of Mars. These features on the surface of Mars hint at possible life on the Red Planet. The strange rock “halos” surrounding cracks in a Martian crater may contain water-rich opal gems, scientists say. These features may hint at the existence of alien life on the planet. 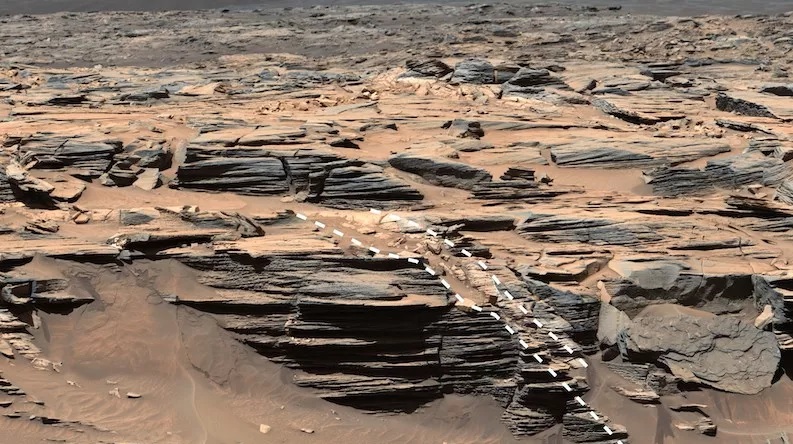 Photos from open sources / Halo cracks of light colors, crossing the rock, extend into the bowels of the planet / NASA / JPL-Caltech

This discovery was made after scientists carefully studied the extensive photo archive of the Curiosity rover.

Scientists have found that these opal-rich halos are not isolated, but are found throughout Gale Crater, a 154-kilometer-wide ancient lake bed that the rover has been exploring since its mission began in 2012.

“It was amazing to see that these crack networks were so widespread and probably opal-rich,” said study lead author Travis Gabriel, a USGS research physicist.

Gabriel and his colleagues analyzed images taken by the Curiosity rover at the very beginning of its mission. They noticed faint rocky halos surrounding a geological fault on the surface of Mars. The halo turned out to be similar to the recently discovered halos on Mars.

To confirm this discovery, scientists studied the chemical composition of the rocks. They turned to another geological fault at a site called the Lubango drilling site. Using the Curiosity Dynamic Albedo of Neutrons (DAN) instrument, scientists measured neutrons blasted from the surface of Mars by cosmic rays.

Cosmic rays are high-energy particles from the solar system that bombard planets and other cosmic bodies. These particles slow down when they collide with hydrogen, one of the main components of water.
Scientists have found that when DAN detects a higher proportion of slow moving neutrons, it means there is more aquifer in the area. Opal is one of them.

The DAN instrument confirmed that some surface features at the Lubango drilling site, lighter in color halos, contained opal, but the same was true elsewhere in Gale Crater.

In addition to the plethora of photographic evidence collected by Curiosity throughout the mission, evidence indicates that water was present at Gale Crater.

The scientists noted that it is therefore reasonable to expect these potentially habitable conditions to extend to many other regions of the crater and possibly to Mars itself. According to Gabriel, these conditions must have formed long before the ancient lakes of Mars dried up.