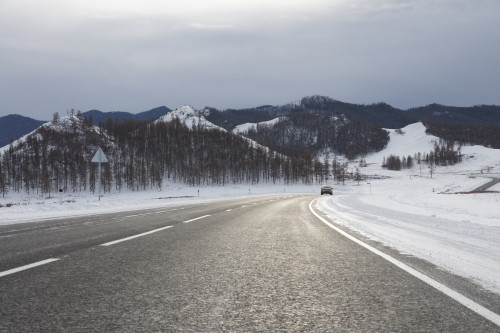 Moreover, on 5 km of them, in the Ovyursky district, work was underway on overhaul. Also, three bridges were brought to the standards.

As part of the overhaul of the section of the route from 1051 to 1056 km, specialists replaced the pavement. When constructing the upper layer of the base, asphalt granular concrete was used, on top of which two layers of asphalt concrete with a total thickness of 11 cm were laid. This will increase the service life of the road surface.

A year ahead of schedule, sections of the road from 1103 to 1105 km and from 1110 to 1115 km were put into operation, implemented as part of the first stage of the repair of the route from 1103 to 1116 km. Here, the road workers restored the existing pavement using high-strength crushed-stone-mastic asphalt concrete, strengthened roadsides and ditches, repaired four culverts, arranged an organized drainage system.

In addition, three artificial structures were repaired on the Yenisei highway in Tyva last year. We are talking about bridges across the Kara-Dyt stream, the Kosh-Oy and Baryk rivers. At the facilities, the bridge deck and beams of superstructures were replaced, increasing the dimensions of the bridges from 8 to 10 meters and the carrying capacity to the standard values, which significantly increased road safety. To preserve the bioresources of these reservoirs, treatment facilities were set up.

We add that new road signs, a barrier fence, signal posts were installed at all objects and markings were applied.

*** As part of the road works program in 2023, specialists will bring to the standard more than 10 kilometers of the route and two artificial structures on it.