The Milky Way has already begun its collision with Andromeda, astronomers say

The Milky Way is surrounded by a vast stellar halo that spans over a million light-years. 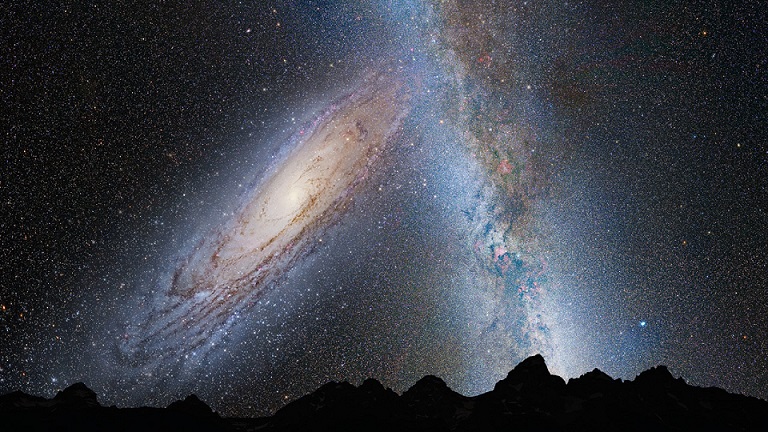 Many astronomers have stated that our Milky Way galaxy will collide with Andromeda in the future. However, if you take into account the most distant stars in each galaxy passing by each other, then that day is practically here. Some stars are already halfway to our nearest large neighbor.

At a regular meeting of the American Astronomical Society, researchers said that stars were discovered at a distance of more than a million light-years from Earth.

“This research is changing our understanding of the outer limits of our galaxy,” said Professor Raja Guhathakurta of the University of California, Santa Cruz. “Our galaxy and Andromeda are so big that there is almost no space between them.”

The galactic disk is indeed about 100,000 light-years across, and the Sun is about 27,000 light-years from the center, and it does have a large central bulge. However, there is a halo around all this. It has a much lower density of stars, but is nonetheless vital to the stability of the galaxy.

“The halo is the hardest part to study because the outer boundaries are so far away,” Guhathakurta said. “Stars are very rare compared to the high stellar density of the disk and bulge, but the halo is dominated by dark matter and actually contains most of the galaxy’s mass.”

Previous estimates of the halo suggested it extended 300 kiloparsecs (1 million light years) from the center of the galaxy. However, this is a rough estimate. Guhatakurta and graduate student Yutin Fang decided to find Lyra’s RR stars to add accuracy to this question.

RR Lyrae are variable stars with a characteristic rapid growth and slow decrease in brightness. They also show a relationship between their cycle length, their color, and the amount of light they emit. Estimating their brightness allows scientists to determine their distance.

Feng found 208 RR Lir in a halo ranging from 65,000 light-years to 1,040,000 light-years away, suggesting that the halo is at least as large as theoretical models suggest.

Guhatakurta and Feng used in their work the results of the study of the Virgo cluster, which contains the largest cluster of galaxies in the Universe. The long exposures required to study these galaxies have also led to images of our galaxy’s more distant stars.