The more popular the dish, the more myths about it. In the first article in the “Unfamiliar Food” series, “Snob” tells why many people think that cheburek should only be with meat, why keep it with three spoons and where to try the most unusual chebureks – from establishments with an atmosphere of the Brezhnev stagnation to restaurants in which dish served with red caviar 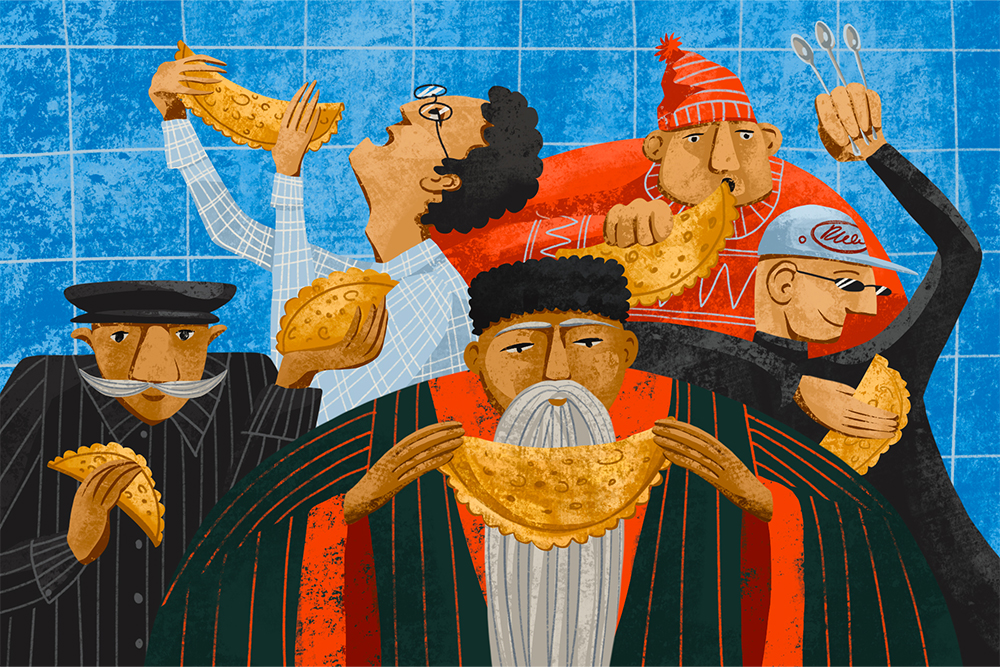 The recipe for the first chebureks was simple and ascetic. If there was meat on the farm, then the dough was stuffed with it. If there was no meat, vegetables were used as a filling – they were wrapped in unleavened dough made from only three ingredients – flour, water and salt – fried for several minutes in boiling oil and served on the table.

Various variations of stuffed dough, quickly fried in a deep bowl, have been preserved in Mongolian, Armenian, Latin American and some other cuisines. But if you trust etymological studies, then the Crimean peninsula should be considered the homeland of chebureks – the very word “cheburek” got into the Russian lexicon from the Crimean Tatar language, in which it means “meat pie”.

From kitchen to catering

The appearance of chebureks in Moscow and other cities of Russia was associated with the “thaw” in the post-war national policy in the USSR. In 1956, the Supreme Presidium of the Union restored the rights of the Crimean Tatars deported from the peninsula after the Second World War, and a year later the first cheburek “Friendship” was opened in Moscow, which is still operating. During the reign of Nikita Khrushchev, the development of public catering throughout the country began, at the same time chebureks began to appear in other cities of the Soviet Union. A little later, during the time of “developed socialism”, the recipe and taste began to change. And, as experts say, alas, not for the better.

“Preparing chebureks for a stream and at the same time maintaining their quality is extremely difficult,” explains the founder of the Meat & Fish and Chebureshnaya cafes, restaurateur Sergei Mironov. “Most establishments fry them in deep fryers designed for french fries. The temperature of the oil in an ordinary deep fryer is not constant – if you throw a lot of pasties into the oil, then its temperature will drop, and if you get them, it will rise. For this reason, chebureks from one fryer can be of different quality. Of course, you can use a special device that maintains the same temperature of the deep-frying oil, but for many restaurateurs this is an extra expense.

Black caviar and food of Korean workers: what Siberian cuisine consists of

The transition of chebureks from home cooking to public catering also influenced their filling. For its preparation, many establishments began to use ordinary meat grinders, making small minced meat from meat, as for ordinary cutlets. However, the cheburek turns out to be noticeably tastier if it is based on finely chopped meat, to which minced meat is also added, but only for “coupling” the pieces of meat together – in a ratio of about 10 to 1.

“Minced meat compares favorably with minced meat: thanks to its texture, juiciness is preserved, which minced meat almost does not have,” Mironov explains the difference in taste.

Since the Khrushchev thaw, several variations of this dish have appeared in Moscow, and now most chefs cook it according to their own recipes. Restaurant critic Mikhail Kostin divides all Moscow chebureks into “Soviet” and “post-Soviet” ones: “Soviet ones are “sluggish” or “snotty”. When you take such a product in your hands, you feel that it is wet. However, this type of pasties has many fans, and the poet Yuli Gugolev once even told Snob about a rare way to handle this dish.

“Professionals eating pasties recognized each other already in line behind them: they held three spoons in their hands – two to hold the hot pasties, and the third, so that, after biting off a corner, pour juice into it without spilling a drop, and then drink it.”

Post-Soviet chebureks can be both “sluggish” and crispy, explains restaurant critic Mikhail Kostin. If the cheburek crust is appetizingly crunchy, most likely it was cooked after paying for the order, and did not wait a couple of hours after cooking until it was put on a plate.

The vodka is not the best, but not singed either. Five places in Moscow where you can get drunk for 1000 rubles

What should be the filling

In chebureks you can hear the statement that a real cheburek should only be with lamb, because it is with this meat that the Crimean Tatars most often stuff it (such categorical statements can be heard, for example, in the famous cheburek on Yaroslavskaya street behind the Cosmos hotel). However, restaurant critic Mikhail Kostin recommends not listening to them.

“Cheburek is a simple and old dish, and in order to create an aura around it, people begin to come up with various rules. This happens not only with chebureks: if you study the recommendations on how to eat dumplings or borsch, you can find no less oddities that have nothing to do with either their recipe or their history.

In recent years, in Moscow and St. Petersburg, cheburek has moved from the category of fast food and hot snacks to a full-fledged restaurant dish, which is served on a large plate with cutlery, and sometimes with broth and sauces. In both cities, you can find pasties with seafood, vegetables, potatoes, mushrooms, red caviar, cheese and other fillings.

“If the filling is cheese, you need to use a variety that will remain soft for a long time and retain a pronounced taste. For example, if you put mozzarella in a cheburek, it will quickly harden and become a tasteless lump. Therefore, suluguni, brynza or feta mixed with something else, such as greens, are better suited for chebureks,” explains restaurant critic Mikhail Kostin. 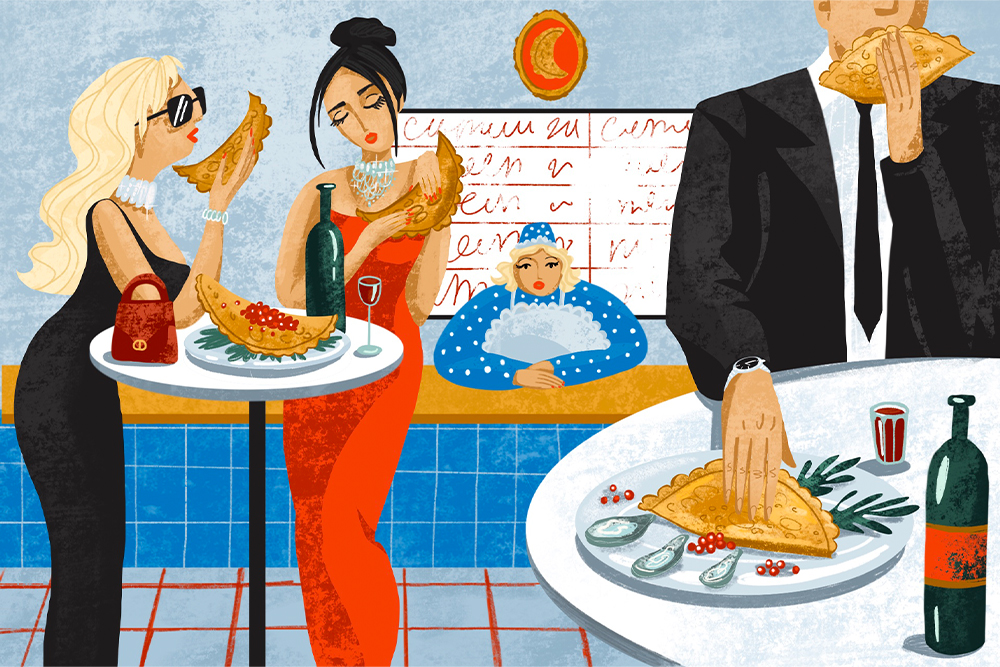 “The most correct drink for chebureks is tea,” says Mikhail Kostin. – It contributes to the rapid breakdown of fat in the body. If you drink pasties with tea, you can avoid the feeling of heaviness after eating. In the Crimea, in addition to tea, they can offer tan or ayran to cheburek, which also muffle the too fatty taste of hot meat and dough that has absorbed boiling oil.

In Moscow, they believe that chebureks are such a versatile snack that they can even be combined with wine. “White wines with lively and crisp acidity are suitable for chebureks. For example, Riesling from the Moselle region or Sauvignon blanc from the Loire Valley – the freshness of these wines is the perfect complement to the juiciness of meat and dough. Among the red wines, Australian shiraz, South African Cabernet Sauvignon and Rioja Tempranillo are perfect, which will reveal the taste of meat with their power and spice,” recommends Tatyana Suchkova, sommelier of the Septa winery.

“Before pasties, everyone was equal.” How the most famous cheburek in Moscow closed

Cheburechnaya “Friendship”. The oldest institution in Moscow with “sluggish” chebureks and inexpensive booze. The atmosphere of the institution, especially on Friday evening, allows you to feel like in a public catering period of the “Brezhnev stagnation” on payday. It is considered good manners in an establishment to clean up the dishes after you, whether it is a plate of pasties or plastic glasses, into which only two types of drinks are poured: tea bags and vodka.

maroon. Kutuzovsky prospect, 2/1sb. A Middle Eastern restaurant by Arkady Novikov with four types of pasties, including, for example, pasties with shrimp and stracciatella. Portions in the restaurant are generous, with plenty of toppings. And the dough is dense and crispy, thanks to which pasties are convenient to eat with your hands.

“Chebureshnaya” by Mironov. SEC “Afimall”. The only place in the city where pasties are made, which you can eat on the go without fear of getting dirty, and order for delivery without worrying that they will get wet from the broth and become “sluggish” on the way. This became possible thanks to the secret recipe of the dough and the unique equipment that was developed in the institution. The filling of meat chebureks is finely chopped meat with a small addition of minced meat for “coupling”. Chebureks are prepared in two ways: deep-fried – for fans of the classic Soviet recipe and in a pan – for those who do not like the dough to absorb too much oil.

Cafe “Pushkin”. Tverskoy Boulevard, 26a. Probably the most expensive pasties in Moscow. The set served in Pushkin includes three chebureks made of thin crispy dough with pepper and meat filling and juice. The dish is served with homemade sauce.

Wine cellar Septa. Bolshaya Filevskaya, 4. The only place in the city where a certified sommelier helps you choose wine for chebureks.

“At Larisa”. Rubinshteina street, 29/28. Cheburechnaya and glass in one institution. Local chebureks are distinguished by the bright taste of the filling and crispy dough. The bar menu for chebureks offers more than 30 types of strong alcohol and branded mixes based on the alcoholic poem by Venedikt Erofeev: “Tears of a Komsomol Girl” – from horseradish, tonic and cucumber, and “Moscow – Petushki” based on a strong aperitif, sparkling wine and with the addition of orange . The menu has a special tincture developed by bartenders for chebureks, which is reminiscent of Bloody Mary in composition and taste. On weekends and Fridays, there are many visitors to Larisa’s, so tables must be booked in advance.

Bistro Garson&Chici-bichi. Nevsky prospect, 95. A place near the “Rebellion Square”, where crispy chebureks are served with satsebeli sauce and chicken broth.

Network “Crimean chebureks”. Inexpensive chebureks made from thin dough with a large selection of fillings: for example, the menu has a Karelian version with lingonberries and a Caucasian version with herbs (the latter is cooked in deep fat or in a pan if desired).